Habib Farajabadi’s works have a special kind of pull. At first glance, the paintings exhibited here may appear uniform or monotonous because of their similarity of form and technique. Deep within however, they are based on a skilful sophistication and an expertise that calls for closer study. Their apparent monotony challenges the viewer to break through it. It is difficult to confront Farajabadi’s paintings without scrutinising them in detail and trying to get to the bottom of their sometimes chaotic structures. As you attempt to trace and decrypt his order of lines, you suddenly spot figures, shoe prints and even an entangled collection of indecipherable letters. They shift, crystallising into unfamiliar hieroglyphs and shapes, insisting to different degrees on the symbolic yet unknown meaning they seek to convey. Farajabadi’s images speak – but in a foreign and yet somehow familiar, universal language. In a way, these indefinable structures recall the scribbles and scrawls we see in metro stations, at bus stops or on park benches: sometimes scratched brutally into the wood or varnish. Their design vocabulary is almost universal: everyone knows it; it has been branded, albeit blurrily, into our visual memory. But its meaning remains elusive, just as it probably is to their creators. These scrawls become clues to the act of creation, to the way they were made, rather than to what they may represent.

Ultimately, it is the abstract that has become the most formative element of Farajabadi’s art. It is not about abstracting ourselves from the realities or images that surround us; it is about working abstractly from the ground up, working from a subconscious impulse using the tools that are available to us. This springs from a practical maturity and a visual memory that soaks up everything, both of which Farajabadi has developed as a self-taught artist, constantly experimenting and playing with shapes, lines, colour and materials. Thus, the whole process of creation in the studio, both material and immaterial, becomes part of the work: everything can be seen in the work. In this way, much like street art scrawls, the experience of the artistic process can be felt more strongly in the image. The artistic practice becomes its own subject.

By using only a few colours, Farajabadi has made sure that the materiality of the colour reveals its own particular quality. Our attention thus necessarily turns more to the nature and character of the work, and the surface thus gains its own special charm. This applies both to the artist’s paintings and his sculptures. They develop not only a congruity of colour and material, but also of form. For, in a number of ways, Farajabadi’s two vastly different art forms draw on the space around him, feeding off impressions of the city, graffiti, posters, books or art, or springing more directly from found material. Farajabadi makes all this – his work process and the images that influence him – accessible and relatable through the social media platform Instagram. Here, he documents and shares his artistic practice, and uses cross border networking to open the world up to him as an Iranian and conversely, to absorb broader perspectives himself. 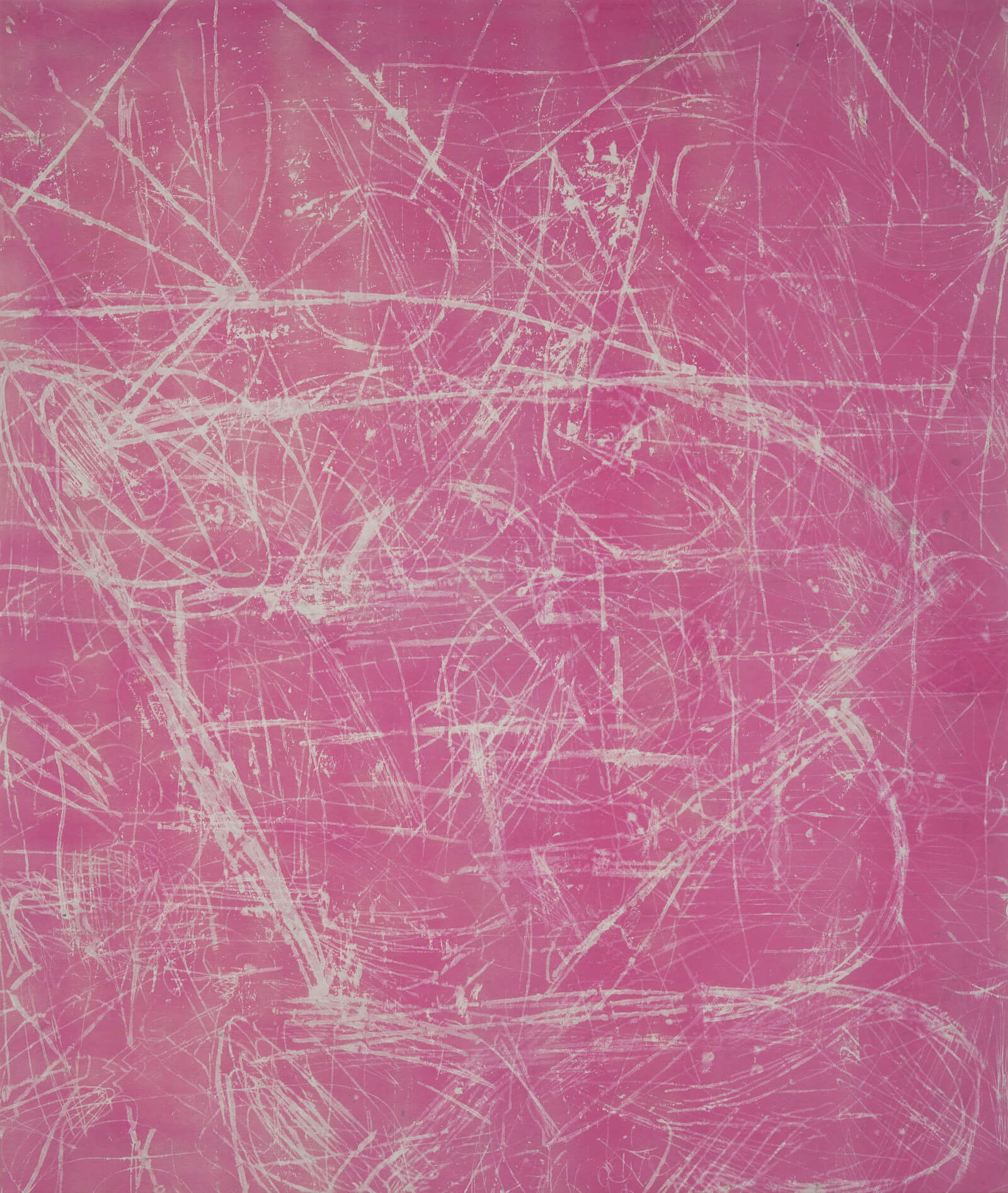 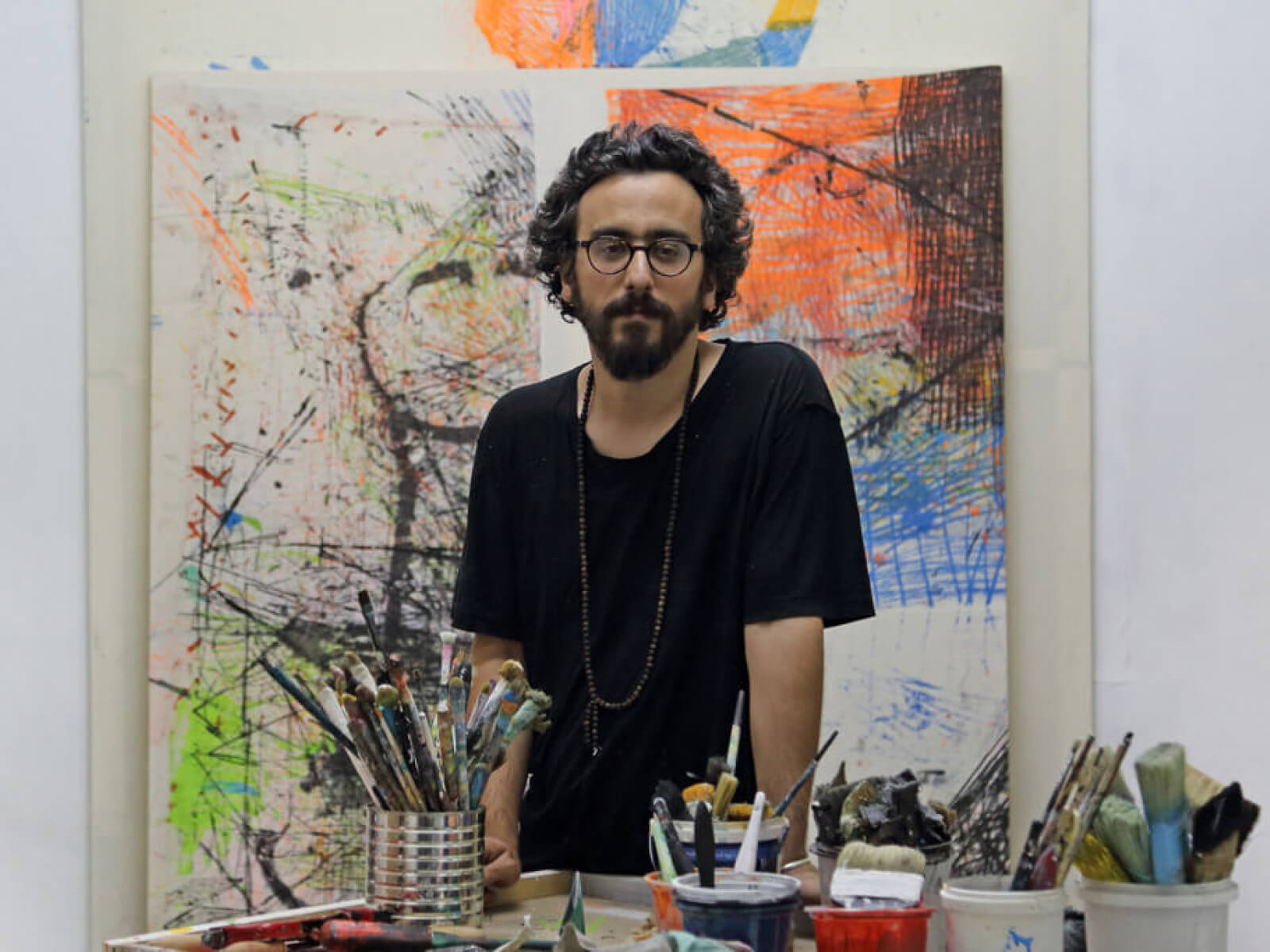 Habib Farajabadi uses all sorts of tools to compose his acrylics; things such as nails, wood stock, forks and hair brush, without ever dispensing the regular paint brush. Now and then, these marks suggest something like hieroglyphic signs, ancient calligraphies, letters of a non-existing alphabet. Farajabadi works on both sides of the canvas, even if much of the surface is left raw and visible. Where there is a conscious choice of using color, he’s not economical: the artist often prefers bright, strident tones. His acrylic brushstrokes remind, in their texture and ludic colors, childish chalk; either that or the canvas is taken by a dark atmosphere. The color black is always present; sometimes as dominating hue, others supporting a colorful composition—something even more present in the rawness of his drawings.

Also a sculptor, Farajabadi works mainly with wood and plywood, on which additional elements are incorporated, creating sometimes a contrast between the colorful bodies of his pieces and its menacing heads. Habib Farajabadi was born in 1982 in Iran and he lives and works in Tehran.