Every proximity entails a vast array of sentiments. From the sublime to the dreadful, from joy to boredom, and many others, lost in a grey zone, untranslatable. The tension between two bodies compressed in the same room, in the same routine, imprisoned in the same dreams—the ambiguity of this close connection is unmatched; there can be no substitute to the experiences shared by the contact of the flesh, the meeting of the souls.

The central theme of Justin O’Brien’s works is not so much the nearness between lovers, the theatre of affections with which Eros inflicted us—hopeless expectation, calculated indifference, confident vanity, desire—, as the sphere in which these sentiments develop. Confined in a suburban house, compressed in a smoky bar, late at night, lost in the indistinct curvy zone of deep human connection, the lovers seem trapped inside very distinctive places. Nonetheless, it is there, in the concrete counterpart of their dreamy beings, that life unfolds, dancing in a blue rug, engulfed by an armchair, posing in a chaise longue.

In this sense, it would be partial to understand O’Brien’s paintings as having to do merely with queer sexuality. As the artist explains, “it actually has very little to do with this. Sex momentarily comes into play, as it does in life. I think the majority of the work is rather about an intensity of feeling. Intensity in the quiet moments of domestic life. About experiencing an extreme emotion within the mundane. The moments are queer because I am queer.” At the end of the day, the universality of love, regardless of colour, sexual orientation, and nationality, imposes itself. Eros has no eyes for identity politics. Below his wings, we’re all equal.

Interestingly enough, even though these characters are all completely immersed in their own universe, they appear to be aware of our presence. They pose to us, looking directly at our end of things. Were we expected to sit at that table? Without realizing it, we’re stepping on the same rug, sitting on the same sofa. The interaction of gazes—between us and the characters on the paintings, and between themselves, the lovers—is unstoppable. Everything is private, but still very much familiar. Perhaps we have also experienced moments such as these, as ambiguous and full of promise. Moments transformed by the compelling watch of a loving gaze, in all it contains of care, pressure, and menace, as the Russian poet Marina Tsvetaeva described, a hundred years ago: “black as—the center of an eye, the center, a blackness that sucks at light. I love your vigilance.” 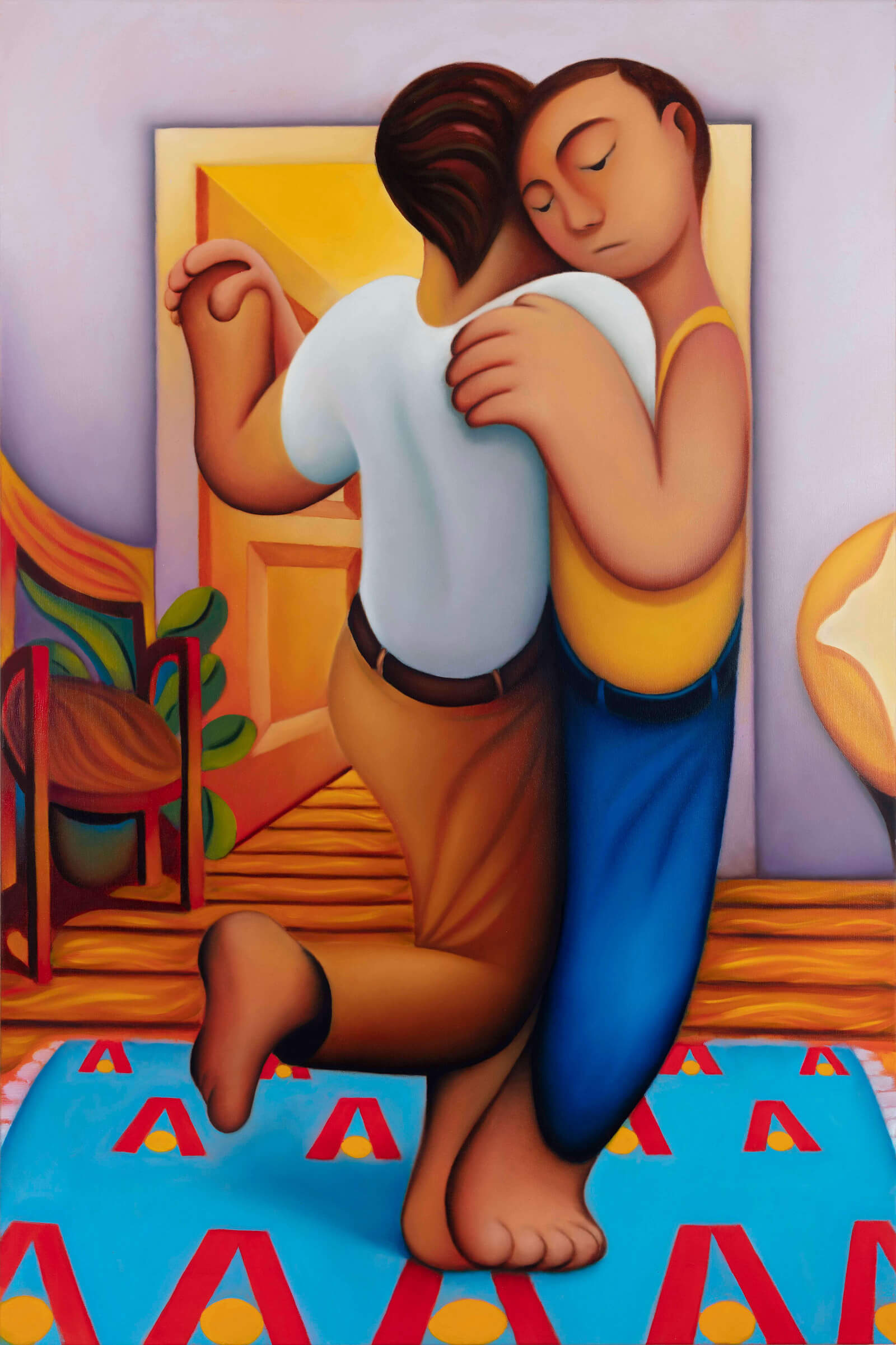 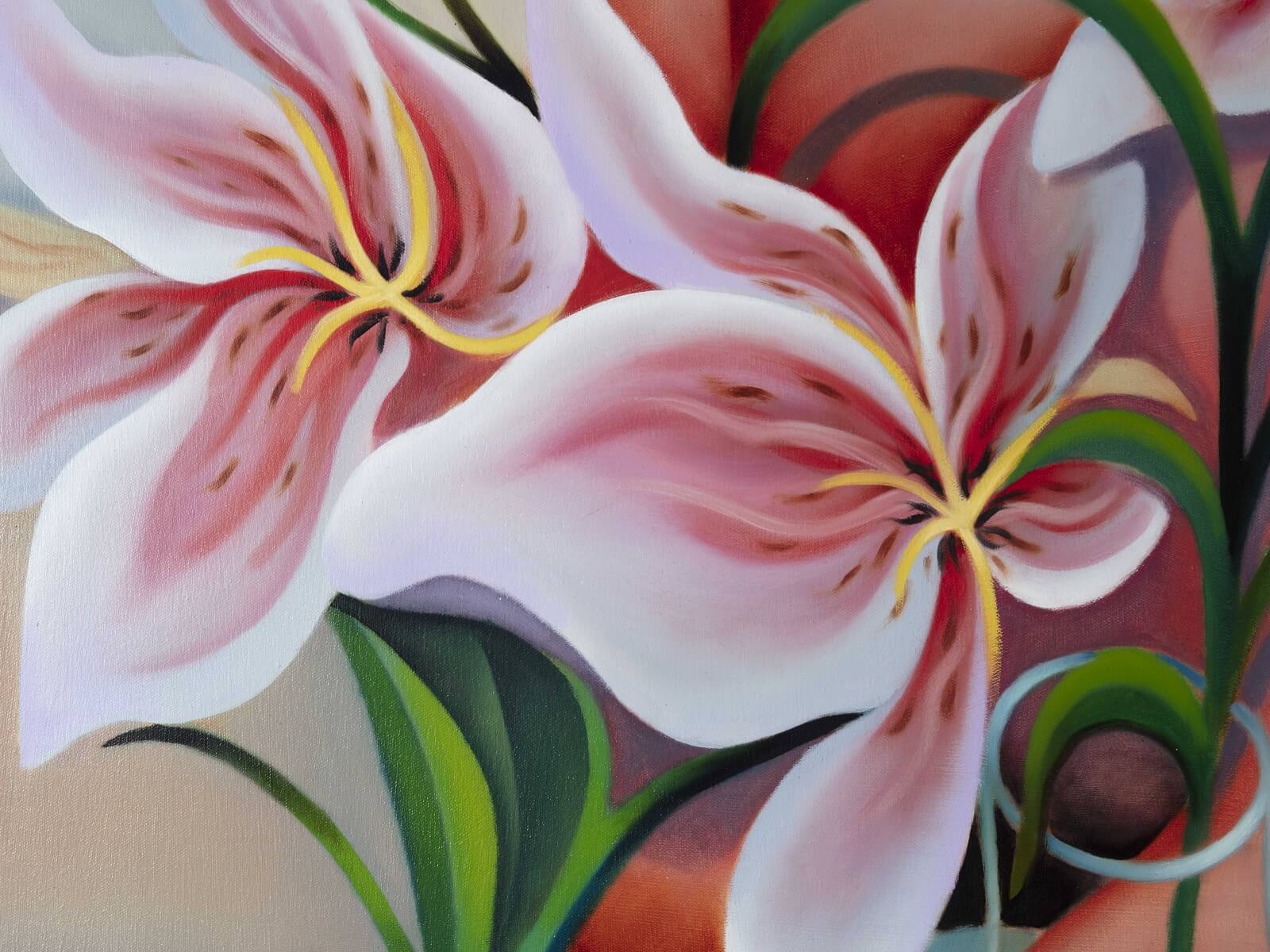 Justin O’Brien’s oil paintings and drawings portray moments of tenderness, intimacy and contemplation with soft gradients and interlocking compositions. His figures have a sense of quiet that speaks to a deep sensitivity and an intense inner reality. O’Brien has displayed work at CHART Gallery in New York City, Galerie Tanja Wagner in Berlin, and Richard Heller Gallery in Los Angeles. His first solo show was at Monya Rowe Gallery in New York City in October 2019.

Justin Liam O’Brien attended school at Suffolk County Community College in New York, where he was introduced to oil painting. Then, he received a BFA in Digital Arts and 3D Animation from Pratt Institute in New York City in 2016. He was born in 1991, and lives and works in Brooklyn, USA