On the 6th day of Creation Adam and Eve were physically one, united and present within a single human form. Prior to God’s removal of Adam’s rib, that mythological separation that created the division between man and woman, the human was, in this instant, a mystical harmony of dedifferentiation. Hereafter begins a concept of gendered dualism that will forever shape culture.

But what about Lilith? God divined Adam’s first companion from the same material, the same breath simultaneous to Adam’s own conception. For her refusal to serve man as part of God’s will, He banished her into ultimate darkness where she would later emerge as the incarnation of evil in form of the witch, Kali, the Boogeyman or an indeterminate monster. However in her exile she suffered no compromise to her primordial condition, existing in a pregendered state of enlightenment. Lilith’s true curse is possessing the secret knowledge of divine oneness.

The third sex, found predominantly in non-Western cultural gender narratives, is always a figure of powerful ambivalence, of “not-knowingness” – a state considered by Eastern philosophy to be one of ultimate enlightenment. Within this trans-state, sexual energy is transformed into sacred power. This limen is the grey zone that merges the duality of man and woman, good and evil, into a unity of opposites.

The Rebis is the ultimate achievement of the alchemist. It is the combination of double matter that reconciles heaven and earth, the body and the spirit, man and woman. Revealed in this magnum opus is the mystical oneness of everything. This notion is embodied by the revelation of the Divine Hermaphrodite.

The paintings of Katherina Olschbaur summon this same desire of the alchemist. Embodied in her work is a metamorphosis of materiality where we see the primordial soup swirling with an entropic indeterminacy. This is the transitory zone where the slime lives. Her compositions depict a mirage of figuration, of beings in formation, of perfect imperfection. Limbs emerge struggling for status where hoof morphs into hand or testicles become the floral fecund rot of day-old oysters. Her gestures are both highly technical and emotional. Her references are the debris of cultural outcasts. She kneads the surface while unravelling the stability of her subject.

God can only be divined through the purest aurum. Gold is a conduit of many Gods throughout culture and all require the purest surface to successfully summon their presence. It is a revered material of prosperity awash in sacred luster. There is no luster without lust. In the highest and lowest of groups gold is used to burnish the surface of anything with superstitious luxury. Olschbaur’s color palette is at first unsettling, unnatural and high-pitched. Her forms appear to radiate their own light, a light that is as much De Chirico as it is Californian in its golden hours of perfection. Once the eyes settle a palette based on the spectrum of gold becomes clear. The works tremble with an aura that has vibrated through the ages.

There is an alchemical surrender in this avant-garde of survival of Olschbaur’s canvases: a building up and destroying the figure. Minotaur, Telamon, High heel, or Golem; they oscillate in and out of focus, becoming and unbecoming as if Dr. Moreau chose to use a paint brush to divine his beasts. They are avatars in the next step of our evolutionary chain. They physicalize the population of a soon-to-be discovered land. As viewers we hang onto what we know and intuit what might be. The works demonstrate the painter’s quest as a laboratory of freaks, fantasies and fictions of sexes intertwined, a bestiarium of possibilities birthing unto the picture plane.

The exhibition The Divine Hermaphrodite looks at sacred oneness across different cultures through contemporary art works. It addresses different notions of transgender as spiritual states of divinity found through the merging with the perfect other.

It embraces occult, alchemy and non-western approaches of the third sex towards imagining self-realization through this notion of mystical oneness. 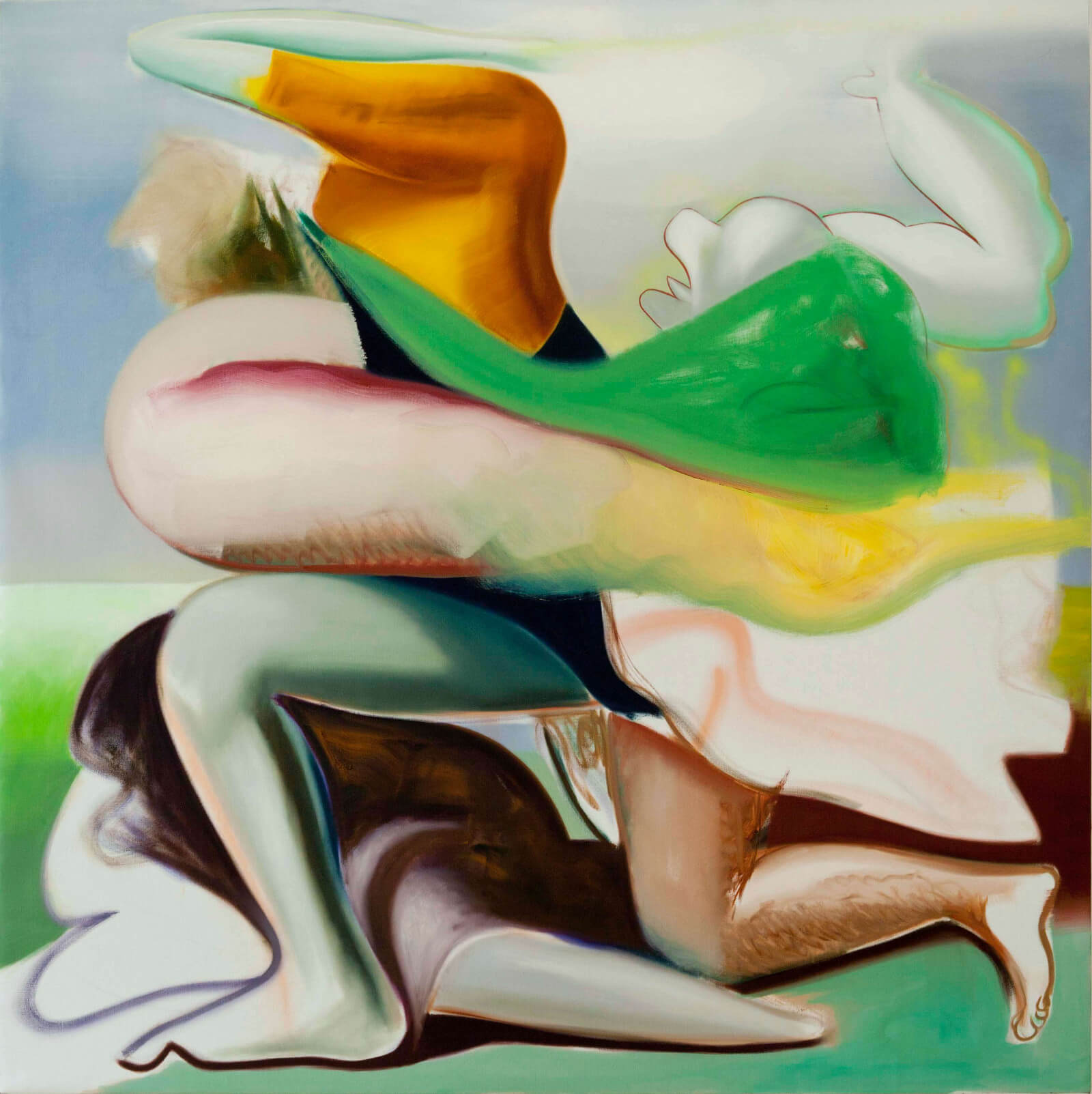 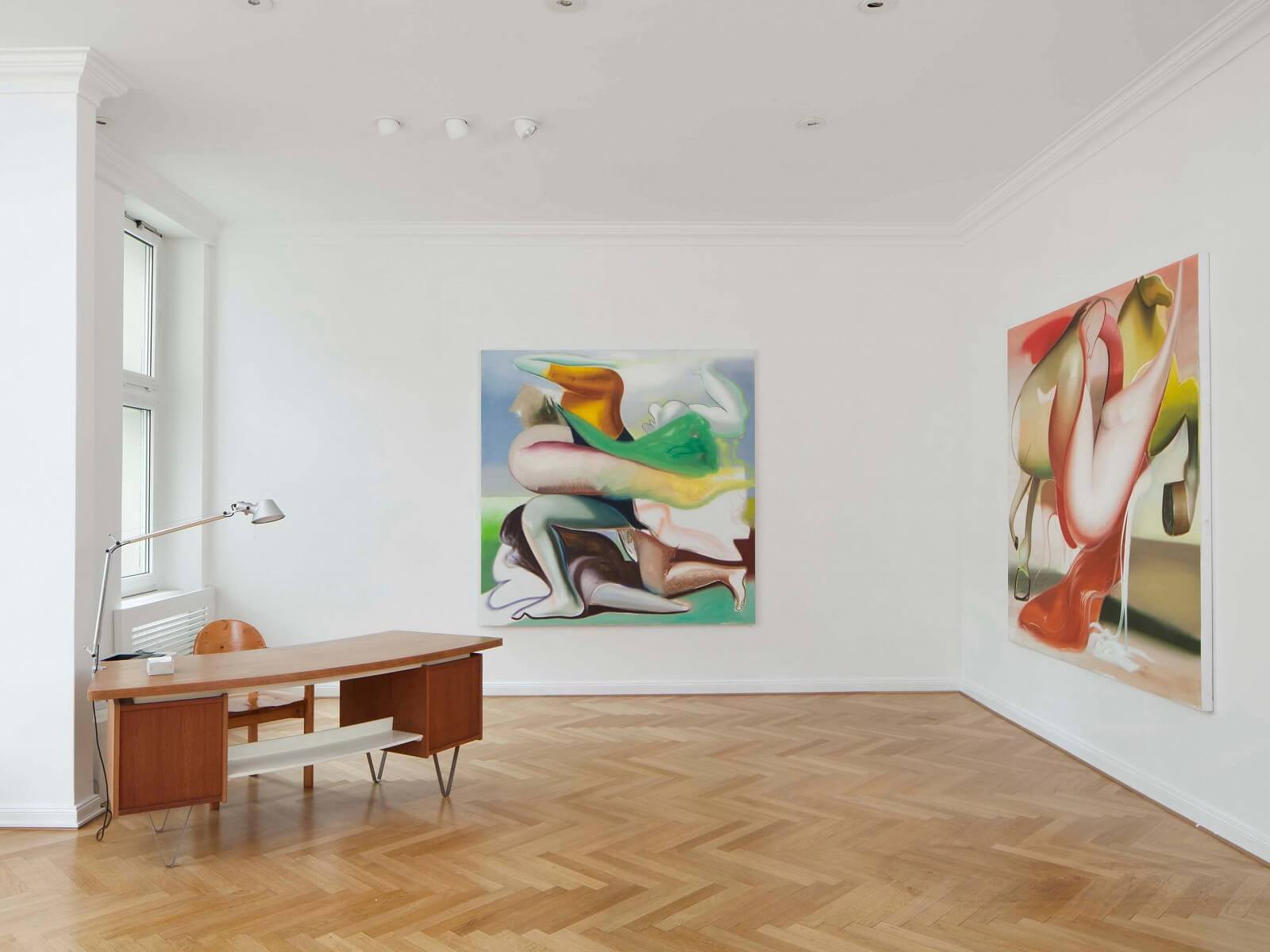 Katherina Olschbaur conjures seductive forms through an artistic lens reminiscent of Surrealism; the metamorphosis of figures and materialities — simultaneously creation, fusing and disbanding — is a fundamental aspect of her work, which is characterized by smooth washes of neon-like color. Her work has been exhibited in Austria, Greece, Italy, China and the USA.