When you speak with Magdalena Shummer-Fangor about her work the word that she uses most is “pleasure.” She paints because she loves to paint and loves to see people enjoying her work. Her paintings are intentionally about simple domestic subjects, such as flowers, plants, cats, dogs, or fairy tales. Addressing the archetypes painted in a naïve manner and framed in thick wooden frames they resemble folk art from an unspecified part of the world.

However, the art historian Shummer-Fangor is not an outsider artist. She has spent her life living with art and among artists, and witnessed many significant artistic shifts in the world. She shared her life with her husband, the late renowned Polish American artist Wojciech Fangor, with whom she emigrated from Poland in the ’60s and briefly lived in Vienna, Paris, Berlin, and London before finally settling in the USA. She started to paint in 1965 when they were in Paris, but her output was small and primarily private. After she turned 50, which means 37 years ago, she decided to concentrate on painting more seriously. While Fangor was dividing his time between teaching and painting, Shummer-Fangor was taking care of the household and making her cutouts and painting in her spare time was.

It started with a coincidence. A friend of a friend saw metal cutouts that Shummer-Fangor was making at that time and showed them to Mabel’s Folk Art Gallery in New York on Madison Ave. The feel-good cut-outs and paintings of animals, birds, plants quickly became popular with the public, although the artist was never reviewed by art critics.

Shummer-Fangor paints on board in order to achieve a very smooth texture, which is needed to render precisely all the tiny small details of her tableaux. Oil paint requires time so she mostly works on several paintings simultaneously. When living in the US Shummer-Fangor and Fangor often visited flea markets in the countryside to find old frames. They would soak them in water so that the plaster could easily be removed and then prepare them for their own works. Some of the works in the exhibition are framed in the old frames; today she buys frames in a shop. Shummer-Fangor never studied fine art and refused to take any lessons. Her wish was to discover techniques and painting methods herself. Her husband tried to give her advice but, she laughs, “he was a too well-educated painter to feel what I’m doing.” They never discussed the theoretical embedding of her works either. She has never minded not to get any critical response. What matters to her most is the joy of making and the labor-intensive translation of the beauty of simple objects into art. She wants to give pleasure, as she says, “this is art to look at and to smile.” 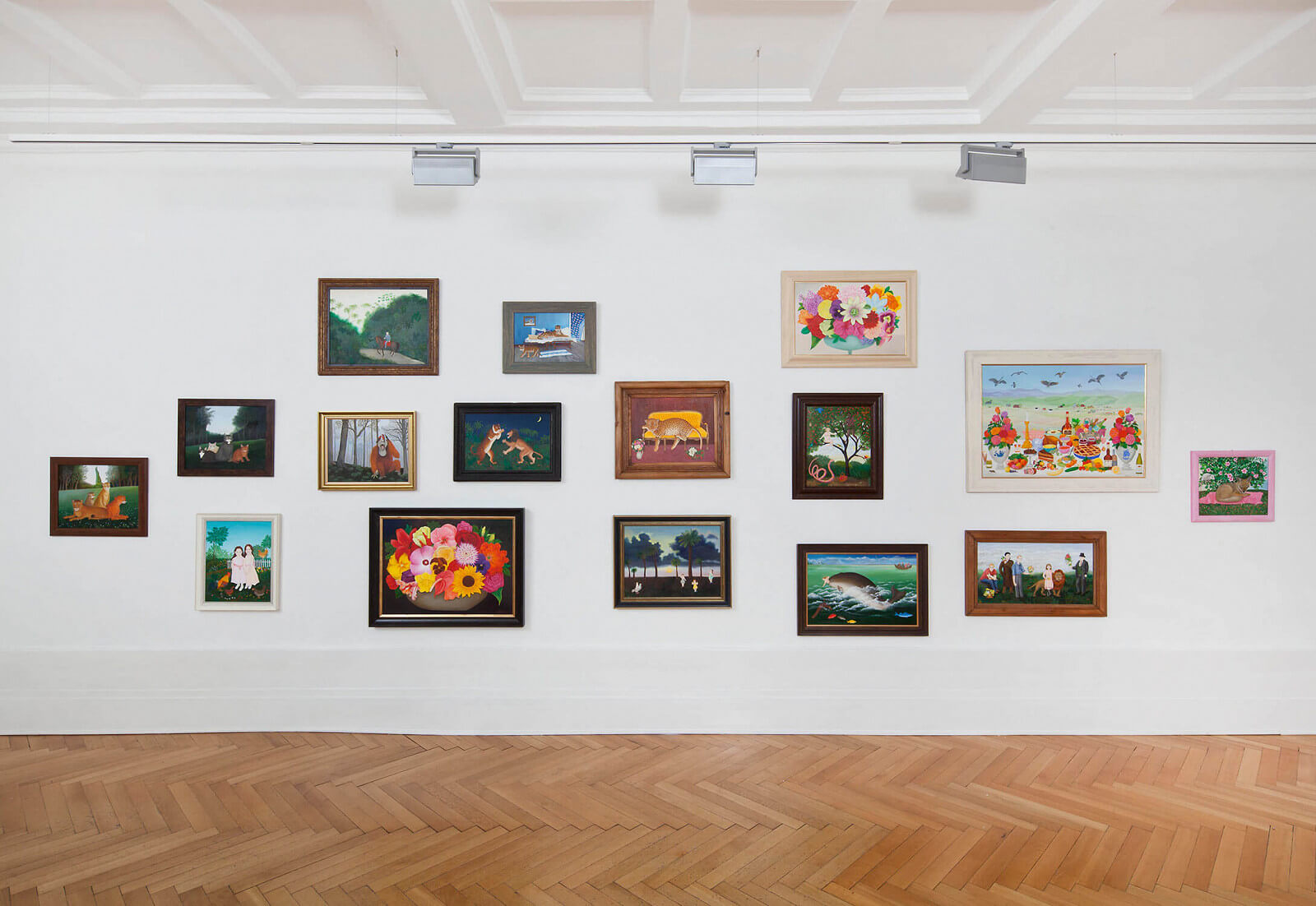 Magdalena Shummer-Fangor wants to give pleasure, as she says; “this is art to look at and to smile.” Mobilizing a strong narrative impulse, Shummer-Fangor creates a world of its own, inhabited mostly by animals, but also formed by portraits and sill lifes. Unpretentious, she paints what she likes, imprinting into the canvas a sense of enjoyment, rendering a style she calls poetic realism.

Magdalena Shummer-Fangor was born in 1930, in Lubliniec, Poland. A graduate of art history at the University of Warsaw, she spent almost half of her life abroad, living in Vienna, Paris, West Berlin, London and the USA. She is the author of several individual exhibitions in Europe and America.