Wojciech Fangor (1922- 2015) is internationally known for his optical abstractions, though his artistic oeuvre has been very diverse and often substantially changing. After the WW2 the Polish Fangor became a successful social realist artist but the disappointment in the political system and his artistic curiosity made him shift his attention in 1956 into more intellectual investigations of the medium painting and its perception. The collaboration with architects Stanislaw Zamecznik and Oscar Hansen triggered his interest in the ideas of space and spacial relationships even more, which resulted in the groundbreaking installation Study of Space (1957) at Zacheta, Warsaw that is often considered the first environment ever, followed by an exhibition at Stedelijk Museum in Amsterdam the year after.

Fangor’s optical art has got a lot of recognition during artist’s life time; among other things he participated in the important exhibition Responsive Eye at MOMA in 1965 or got a solo exhibition at Guggenheim New York in 1970. Josef Albers saw Fangor as his heir who added space as the 4th element to formal investigations of the basic elements of painting. As a true artist though, Fangor changed his focus and approach again and left abstraction in favor of figuration in the 70s. The exhibition at GNYP Gallery presents the so-called TV paintings made in New York between 1977 and 1984. Formally it has been a continuation of Fangor’s fascination with space in and outside the canvas, conceptually it formed a post-modern investigation about the the power and influence of media like the TV in shaping the reality. Fangor seemed to be concerned by similar questions about the value of the image and the media as the ones posed by the younger Picture Generation’s artists around that time.

A few never before published artist’s notes on the series shine more light on his thinking about the series:

“Our current existence entails experiences that require changes in our previous perception of time and space as well as our perception of socio-cultural and geo-political systems. Being exposed in the same time-space to conflicting and colliding powers, it’s as if several films are being broadcast on one screen. One liquidates the other. To cope with this situation, one needs to create a system of filters, or better, a system of multi-perception of various patterns that carry a meaning. If art takes part in the creation of conceptual and learning systems, in order to get familiar with today’s world and to make our lives less dangerous and more comfortable, one cannot successively replace and eliminate the previous style of expression with a new unique style. This was probably the dream of constructivists, but it was utopian. What I’m talking about will not happen in the future with a help of a clear gesture of a romantic hero. This issue has been here and now for a quite some time already and has been producing confused and colliding images.

“I experimented with topological manipulation of photographic images that were becoming a kind of elongation and a consequence of the previous systems. Although, it is too early to talk about these works in a rational way. I noticed that I’m anchored in watching TV images. These meditated visual impulses play a more and more important role in confusion between the so simple to not long ago distinction between nature and culture. We eat prepared and manufactured food, we move on delineated and fixed roads, day after day we get regulated bundles of information and all our senses are increasingly prepared to receive the cooked and prepared meal.”

“My art has been changing. First, there was the idea of the spacial art (environment) which, because of its very nature it was art of participation, co-creative and meant to be socially received…Then I hid in singular paintings about illusionary space. And after that, I escaped into the Television Paintings. Television forms a surrogate (trace) of a society, surrogate of human contacts; it turns on by command and can be silenced by command. It is a portrait of daily life. It becomes a chewed and spit out new nature.”

“The television paintings were based on the image of the screen, on the coincidental photographical fragments of transmission on the photographic film. These paintings that digested my personality and my painterly temperament were covered by a grid of electronic distortions… Television stopped being a magic illusionary image that was pouring itself into the inside of my space. What has left is the TV apparat as an object that has the same power of action as every other object that is used to consume the daily life. The TV box hides its own Gulliver theater. Sometimes it shouts about what is happening in the other hemisphere, only to change the subject and try to convince you about the advantages of a toothpaste or a new credit card. It works with the aid of a not materialistic, dissolving and ephemeral play of light.

“After my arrival in the USA I found myself in a world that was more and more based on electronic communication. Television, being a surrogate for immediate human contacts, has become a game between natural electro-optical effects, and the cultural-mythical stream that pours out of it. This is how the TV painting series came to existence. When changing the subject I’m changing the choice of means of expression. Which causes distinction in the specific periods of my work. But, whether my paintings are skinny or fat, tall or small, freckled or squinted, they all have the same father although different mothers. All of them belong to one family and they dive in the same time.”

The exhibition is organized in collaboration with the Fangor Foundation that represents artist’s estate. It will be accompanied by an extensive catalogue on Fangor’s Television Paintings and their historical and artistic international context with texts by Dominic Eichler, Charlotte Jansen and Oliver Shultz to be published in May. 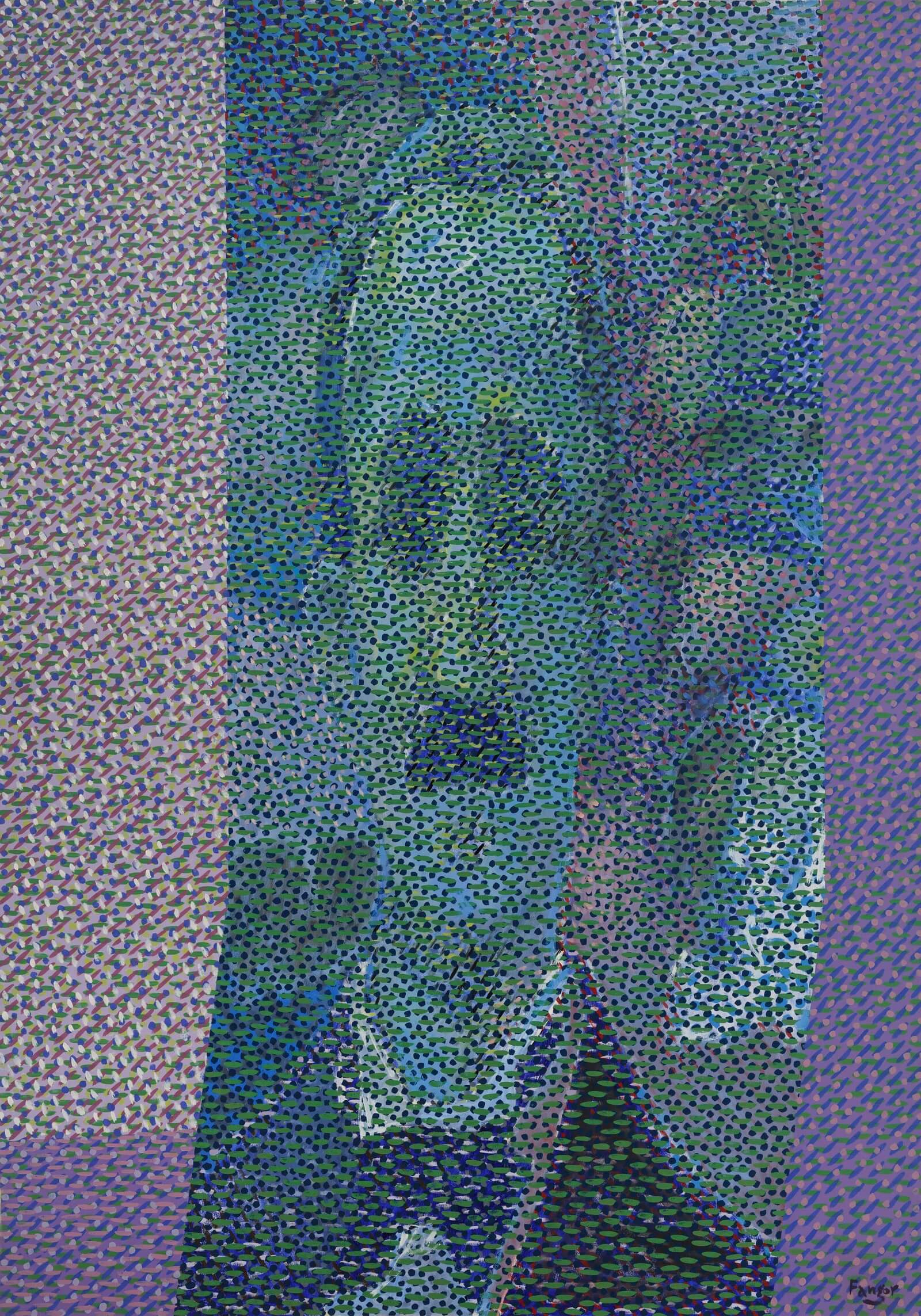 Wojciech Fangor was born in 1922 in Warsaw. His artistic education was disrupted by the Second World War, which later on pushed him into practicing socialist realism as a painter. Between 1953 and 1961 he was employed as assistant professor at the Academy of Fine Arts in Warsaw. At the same time, he was also active as a designer of posters using collages, texts, drawings and photography, and became one of the founders of the Polish School of Posters. Although successful in these fields, Fangor decided to shift his attention to spatial experiments. In 1958 he constructed the first “environment” ever made, A Study of Space. These experiments gradually resulted in his abstract illusionist paintings with diffused edges of color and shape. After short stays in Vienna, Paris, Bath, London and Berlin, Fangor moved to the US in 1966, where he participated in important exhibitions such as ‘The Responsive Eye’ at MoMA in 1965, and had a solo exhibition at the Guggenheim Museum in 1970. After his retirement as professor of art at the Fairleigh Dickinson University in New Jersey, he returned to Poland in 1999. He continued to make art and in 2014 designed murals for the station walls of the Warsaw Underground. He died in 2015 near Warsaw.