Raphael Adjetey Adjei Mayne
Assuming you look like me

A particular strength of Raphael Adjetey Adjei Mayne’s artistic practice is that he works with lively surfaces. The people he portrays float in front of dynamic flower fields, hover above the vibrating monochrome color panels, or place themselves in modest background made out of jeans or awning fabric. Despite these diverse facets, a dense, inner coherence pervades his works and makes them easy recognizable.

Communication and encounter are the starting point, drive and goal of each of Mayne’s works. This is especially true of the children he portrays. During his stays in Ghana, he attentively talks to them, inquiring about their interests and encouraging them to follow his example to pursue their own individual path. He then captures the shared moment in a photograph in order to process it later in his Cologne studio. There, Mayne creates multi-layered dialogues between individual picture elements through painting and sewing, as well as through combinations of fabrics of different qualities and opaque acrylic paints, which he then combines to form a colorful portrait of different materials and haptics. On the surface, the West African Adinkra fabrics full of eponymous and meaningful symbols appear in exchange with pop culture motifs, logos and brands as well as industrial textiles such as polyester. In a certain way, this dense assemblage on the painting’s exterior repeats the elaborate production process of the Adinkra fabrics, which are traditionally woven, sewn, and printed by hand. Mayne’s skillful approach and his broad technical repertoire lead to optical illusions, in which painted and applied layers can hardly be distinguished. All this diversity ultimately results in the overlap of traditional and contemporary, Ghanaian and Western European signs and influences, and through the mediation of image motifs contributes to a substantial merging of times and places.

With this inner richness, Mayne succeeds in bringing the depicted personalities to life. He almost makes it forget, however, that in his paintings, the most characteristic part of a portrait remains vague: depicting faces as an empty space reverses the art-historical traditions of this classic genre ad absurdum. Through Mayne’s skill, however, the individuality is not expressed here through a naturalistic depiction of the face. Rather, individuality embarks on a game with its opposite—anonymity—, a game which leaves room for one’s own guesses as to who this person on the scene is or could become.

The multi-layered exchange between the symbols, materials and techniques, as well as between the portrayed and the viewer, develops into a true encounter—that is the undisputed essence of Mayne’s artistic work. Substantial as well as metaphorical interweavings create a network of global proportions inherent to the image, which both reflects the external influences on those portrayed, as much as it is able to express their inner life, their hopes, joys and questions. 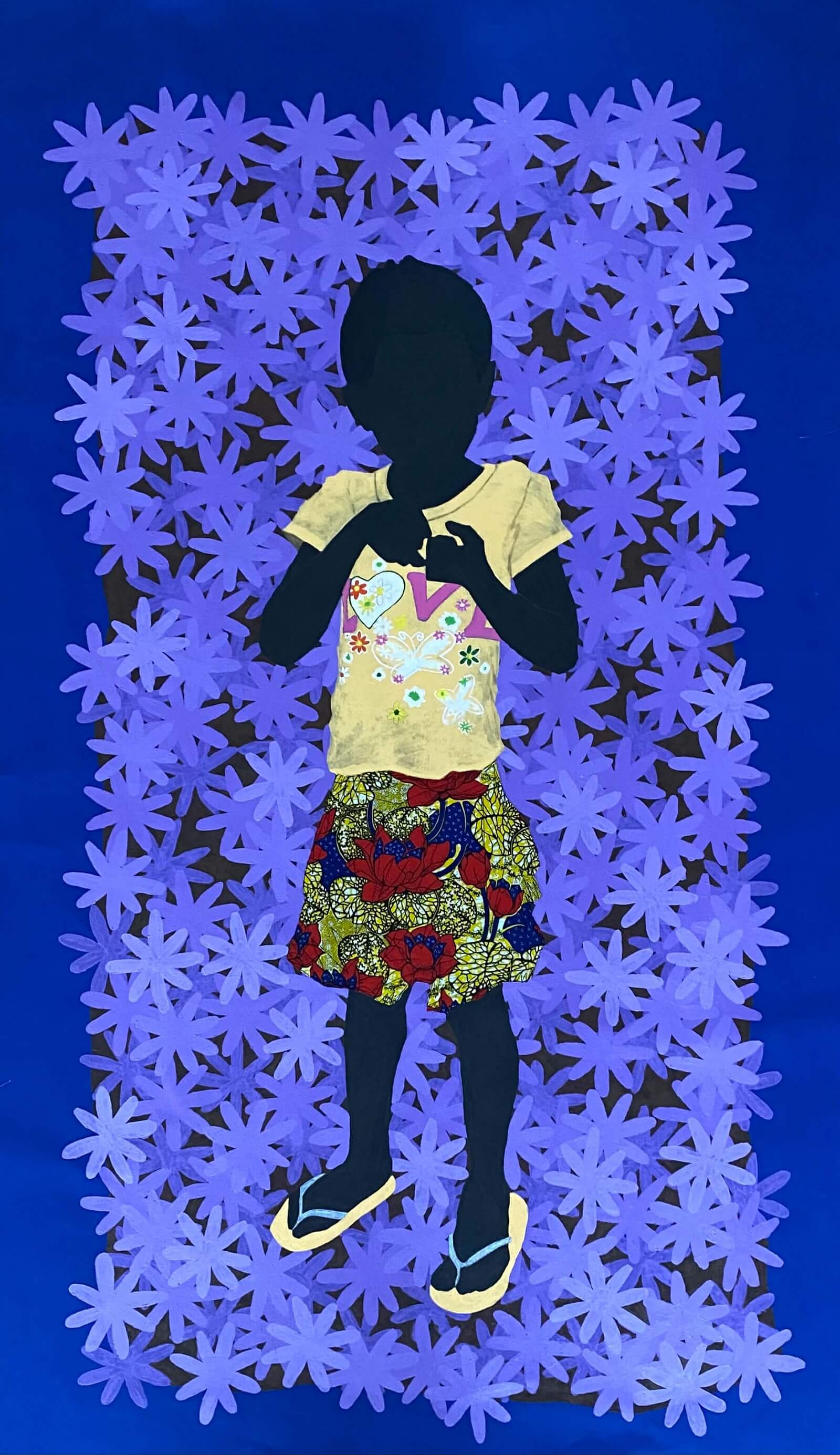 Raphael Adjetey Adjei Mayne’s paintings on canvas or cardboard are characterized by a colorful mix of oil pastel, chalk and acrylic, along with African Wax prints and recycled fabrics. The people he portrays float in front of dynamic flower fields, hover above the vibrating monochrome color panels. In Mayne’s works the West African Adinkra fabrics appear in exchange with pop culture motifs, logos and brands as well as industrial textiles such as polyester, thus combining the traditional influences of the artist’s homeland Ghana with contemporaneity.

Born in 1983 in Accra, Raphael Adjetey Adjei Mayne studied at the Ghanatta College of Art and Design. Since 2013 he lives and works in Cologne, Germany.