The term autofiction pretends to be nothing more than it is, a merger of autobiography and fiction. And yet this still young literary genre is never actually defined on the basis of idiosyncrasies or criteria, but always along names. First the gay forefathers Jean Genet, Hans Henny Jahnn, Hubert Fichte, Hervé Guibert, then Guillaume Dustan and above all Chris Kraus, who made the bed for authors like Tao Lin, Karl Ove Knausgard, Natasha Stagg, Ben Lerner. If there is a commonality, it is that a very present ‘I’ is central to autofiction. Those seeking a cultural sociological explanation for the advent of autofictional storytelling in recent years will find the beginnings of an explanation in the self-promotion culture of social media. It is well worth considering the two together, because both autofiction and social media use authenticity as currency. However, an extremely fabricated kind of second-order authenticity, where the artifice lies in creating the sensation that there is no artifice. Which brings us directly to the work of Gina Beavers.

Her acrylic reliefs have long been concerned with the excessive, saturated image culture of our social media-configured world. Affect-hungry images for quick consumption, often from clickbait contexts, form her trove of material; manicured nails, full lips, and posing bodies are leitmotifs throughout her work. She mainly uses images in which someone pretends to speak about themselves, but in doing so only fulfills standardised image formulas. Beavers has always emphasised such glitches between assertion of authenticity and realisation by physically modeling what was initially flat imagery. Admittedly, this ‘blowing up’ of photographs can also be understood as a formal correspondence to their excessive subjects.

It might be said that authenticity and excess are reordered in Beavers’s ‘autofiction’ paintings. What can be noted is an increase in compositional excess with diverse pictorial levels that interlock with each other. What interlocks, however, has now sometimes become detached from the source material. The artist still plunders the treasure trove of motifs that have accumulated over several years of practicing painting; sneakers, lips, nails but also couches or an album cover of the New Zealand band Broods are alternately crossed with each other or nestled within each other, so that they function as personal but empty signifiers. Signifiers which place individual images in correspondence with previous works by Beavers, where they appear differently phrased and contextualized. In a sense, each of these empty but versatile signifiers functions like the ‘I’ in autofiction: it twists, turns, transforms, and refracts, yet remains a mysteriously mutable entity.

This text was written on the occasion of the exhibition Autofiction, Neue Essener Kunstverein, September 11 – November 14, 2021. 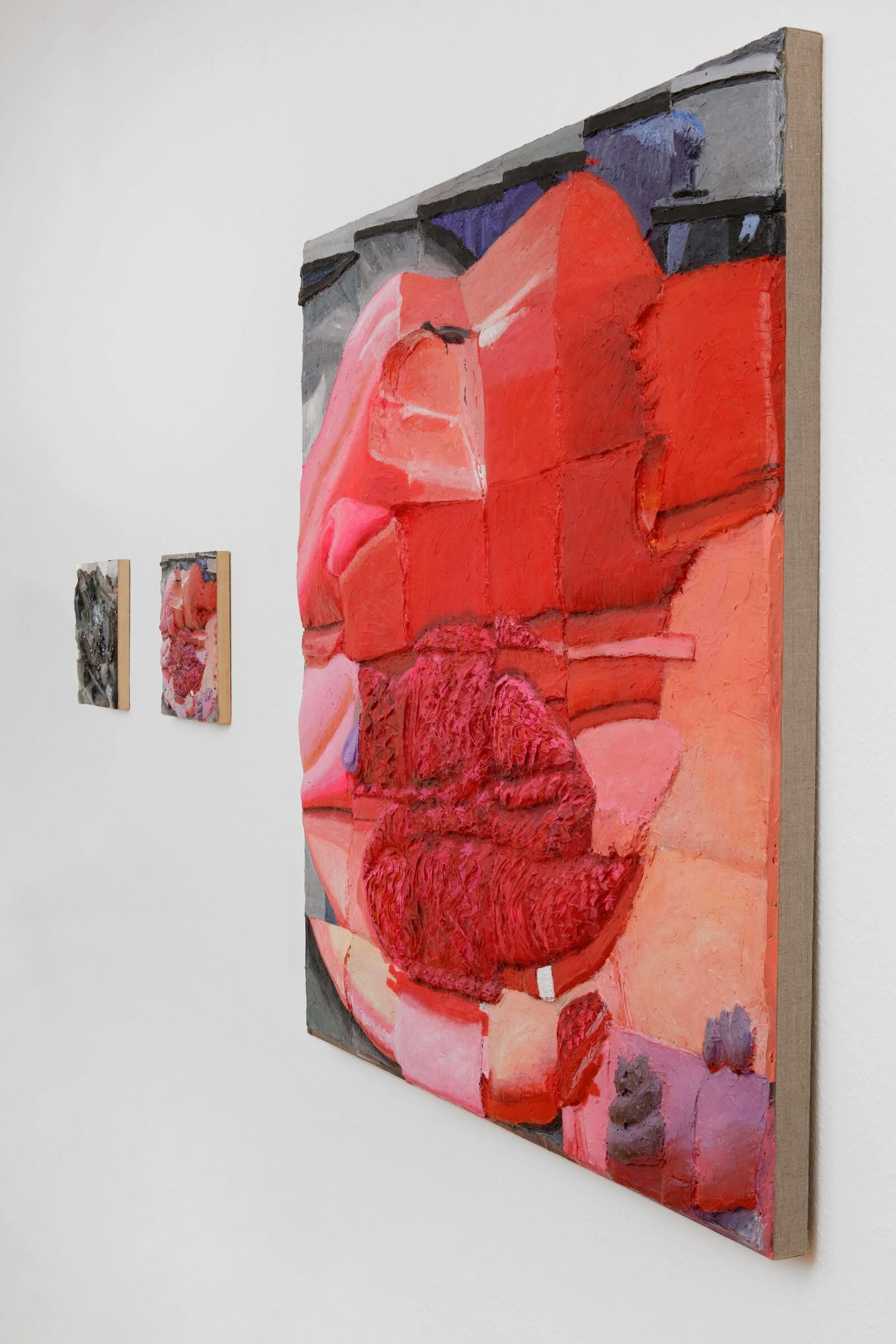 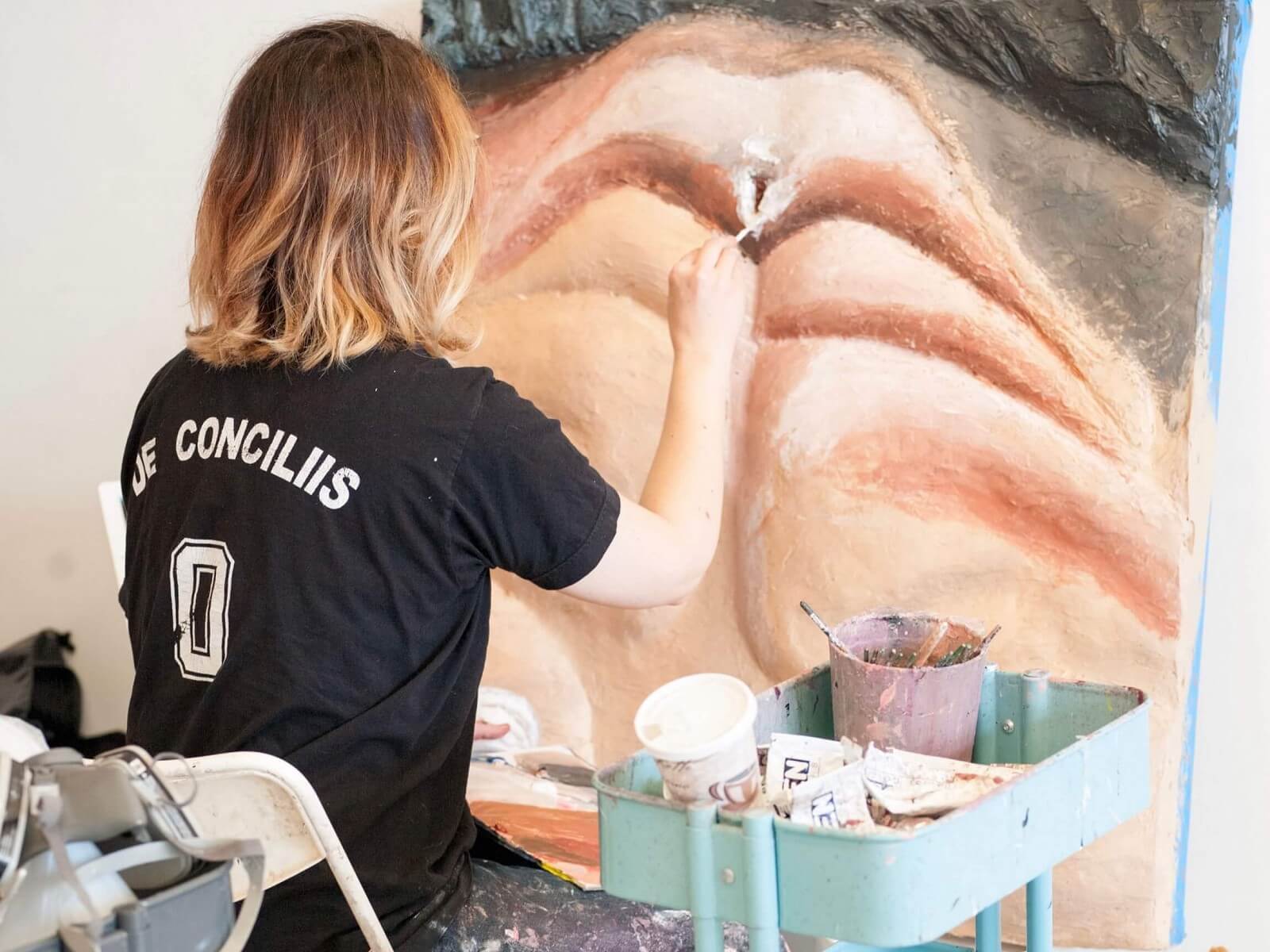 Gina Beavers’ primary source of inspiration is the ubiquitous contemporary visual culture, especially the one emerging from social media. Dealing initially with references taken from the original pop movement of the 1950’s, Beavers evolved to paint the ‘current pop,’ starting to search on social media for image templates to her extravagant, thickly layered relief-like acrylic compositions. Beavers’ anthropological interest in society translates in paintings that explore the banality of internet: makeup tutorials, the so called food-porn pictures, body builder selfies. In tune with the eccentricity of her artistic process, the artist maximizes the visual potential of her medium, taking tridimensionality to its higher possible level and bringing painting closer to some sort of sculpture.

In 2019, Beavers had a solo exhibition at MoMA PS1, and in 2020 she was part of a group show in the Frans Hals Museum in Haarlem. She has a BA in Studio Art and Anthropology and a MFA in Painting and Drawing. Born in 1978 in Athens, she currently lives and works in New York.