The richly detailed and chaotic spaces depicted in Brian Harte’s paintings invariably draw the viewer’s attention, as the eye repeatedly comes across familiar elements and symbols that are then lost again amidst the judicious chaos of the dense colours and composition as quickly as they appeared. A tile pattern in the background might recall a kitchen backsplash, for instance, whilst elsewhere you might detect the outline of something like a teacup or a knife. Shapes resembling the markings on a football pitch, on the other hand, open up room to play with motifs and pictures within the picture. One thing you won’t find, however, is anything solid to hold onto. The rooms and objects suggested appear to float on the surface of the painting, while hints of perspective, three-dimensionality and spaciousness further emphasise the flatness of the canvas. This flatness counteracts the perception of depth in the image at critical moments, so that ultimately, the distance between viewer and image cannot be overcome. In the world of Harte’s imagery, we are outsiders, left behind even when we appear to be close to grasping their complexity. This creates a sense of tension on the canvas that seeks to engage the gaze. Harte’s paintings have something deeply psycho-logical about them, something that remains unfathomable. Their small, identifiable components in the midst of impenetrable swathes of colour locate them at the intersection of the conscious and the unconscious, playing with the relationships between the inner self and its immediate, concrete surroundings.

This peculiar degree of uncertainty is not only integral to the experience of viewing Harte’s paintings, it’s also a constitutive aspect of the creation of the images themselves. Harte’s continuous process as he paints each day in the little studio behind his house is primarily intuitive, allowing fresh impressions from his home and family to find their way into his paintings; though it remains difficult to order them into any sort of personal narrative. In this way, his work as a whole takes on the form of an unstructured archive of everyday experiences, sensations and objects, compiled by Harte and presented to the viewer in an all but unfiltered form. Thus documentary like, he leaves traces of himself in the world – lasting proof of his existence. He also incorporates other material, such as old photographs, especially in his most recent paintings. These evoke a mix of memories, both painful and pleasurable, and demonstrate that for Harte, the past is a component in our experience of the present. His recent works above all interrogate the normalcy of the tangible features of our existence. In other words, he questions everything from the structure of life with his wife and children to the nature of simple household items to the colour of the walls in his kitchen. As such, the uncertainty when one looks at Harte’s paintings becomes even more pronounced. Nothing in the worlds he depicts is self-evident; on the contrary, most of their elements raise questions or create confusion. As viewers, we set ourselves the same task as Harte faces in his work: to investigate impressions of everyday life and ask ourselves what they provoke in us. 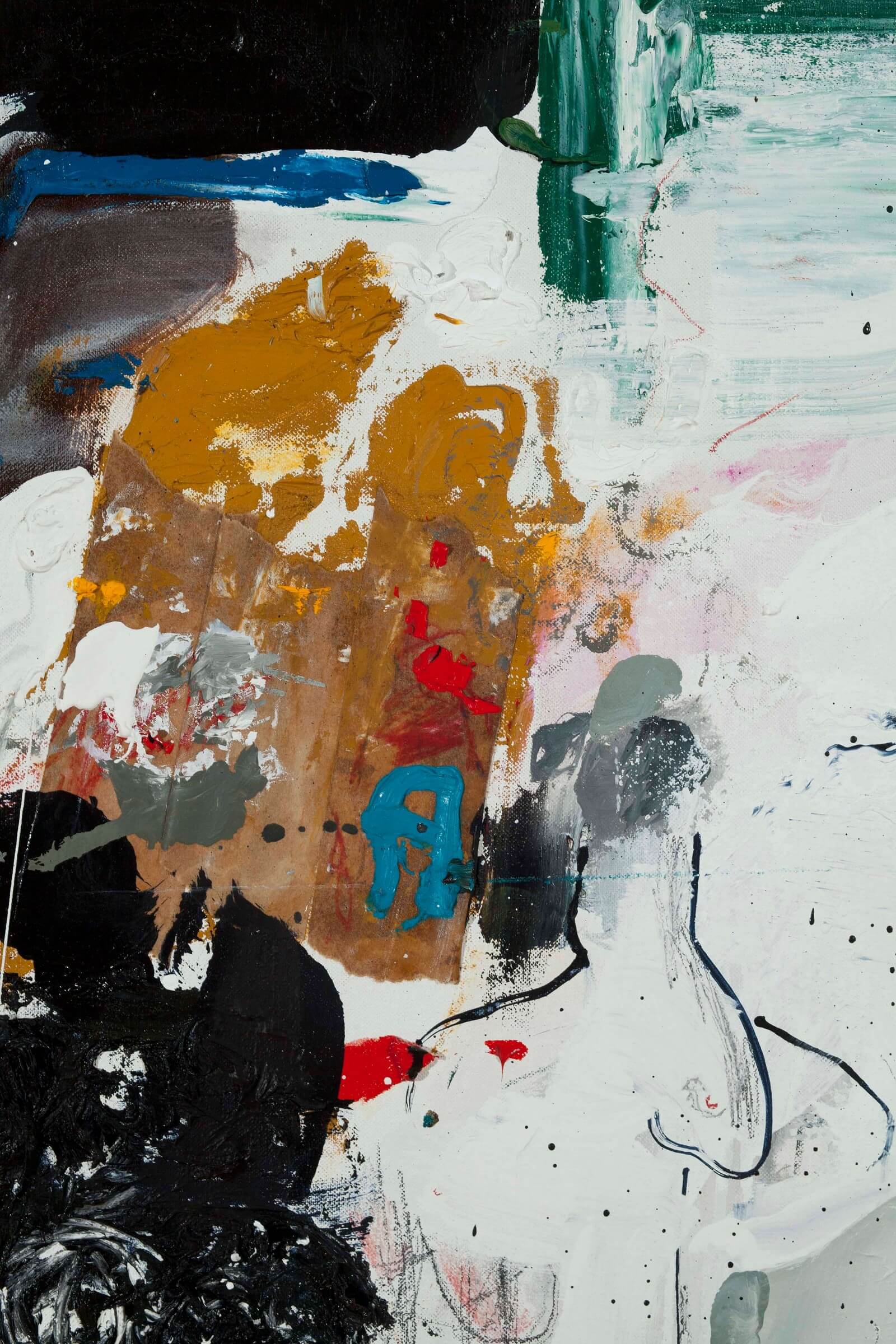 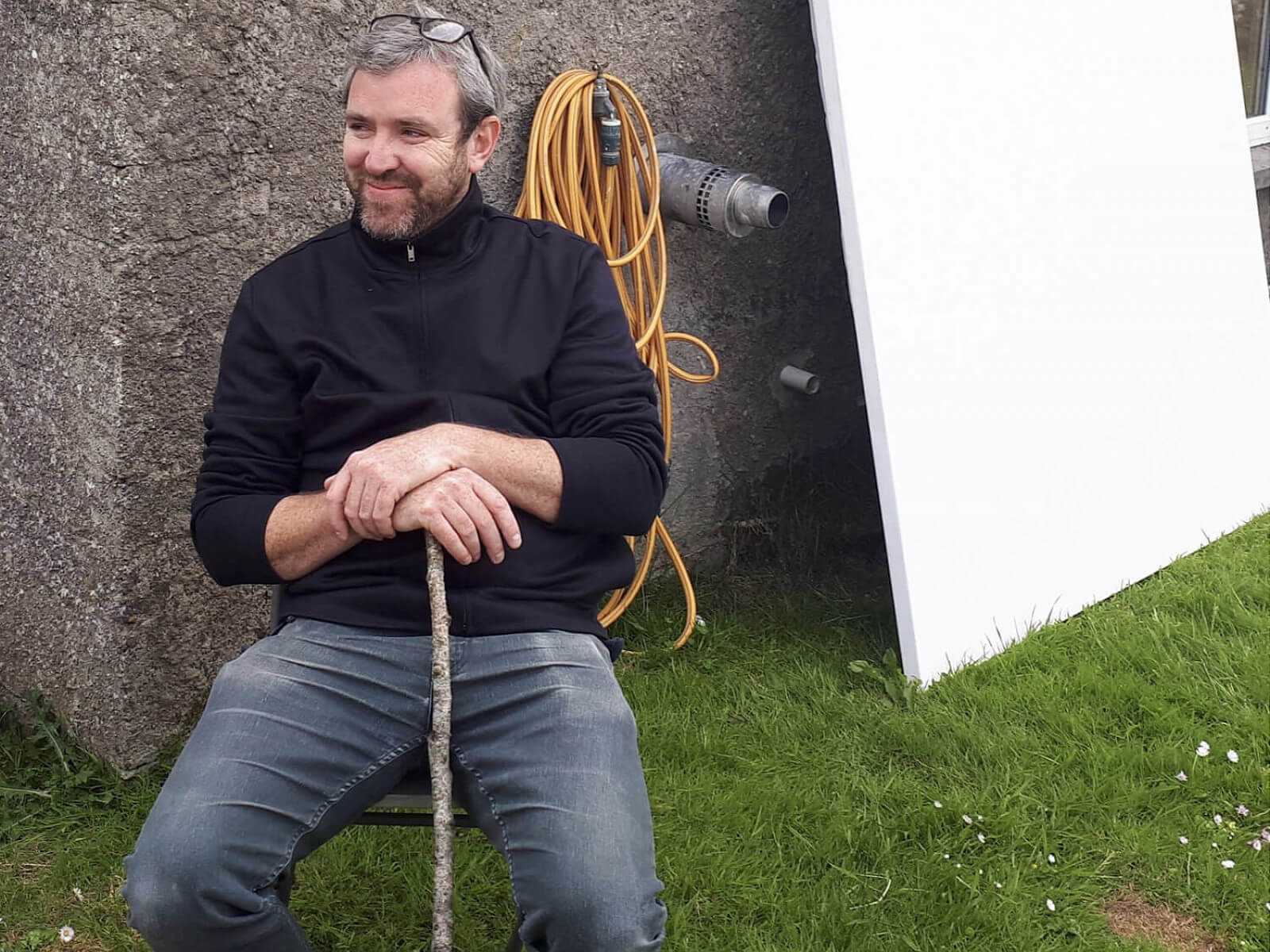 One of the main characteristics of Brian Harte’s paintings is his bold use of color and the indeterminate condition of the canvases’ figures, which remain in a state between the sketch-like and the finished. The observer’s eye travels through the richly detailed and chaotic spaces depicted in the artist’s big canvases and slowly finds familiar elements, perhaps unnoticeable at first glance. A tile pattern in the background might recall a kitchen backsplash, for instance, whilst elsewhere you might detect the outline of something like a teacup or a knife. Therefore, Harte pursues an investigation on the relationship between abstractionism and figuration, between the sketch-like and the finished, a process that relates to the tradition of British painting.

Brian Harte graduated with first class honors at the Crawford College of Art and Design in Cork, and has been awarded the Arts Council of Ireland’s Project Award on two occasions. He was born in 1978 and lives and works in County Tipperary, Ireland. His work is part of international private collections, as well as permanent collections such as the Kunstmuseum Wolfsburg (Germany), the Crawford Municipal Gallery (Ireland), the Contemporary Irish Art Society (Ireland), the University College Cork (Ireland), the Bank of Ireland (Ireland), among others.