Not long ago, I had the opportunity to revisit the Kim Kardashian sex tape. Made in 2003 and leaked in 2007, the video – which Kardashian starred in at 23 with her then-boyfriend, the middling R&B singer Ray J – has been known vernacularly for the past decade as the vehicle that decisively catapulted her, along with her family, into the national spotlight. The Kardashians are currently so pop-culturally omnipresent that it’s hard to remember a moment when they weren’t, but watching the tape allowed me to recall an earlier time, when Kim was recognized primarily, if at all, as a fame-adjacent Los Angeles party girl – friend and assistant to celebrity heiress Paris Hilton and daughter of the late Robert Kardashian, O.J. Simpson’s onetime confidant and lawyer. What was even more interesting to me when returning to the tape recently, though – and what is still, arguably, one of the most consistently striking elements of any Kardashian-involved production – was the way Kim looked in it. Over the past several years, the Kardashians – with their makeup lines and advanced face-contouring strategies and insanely popular, filter-heavy Instagram and Snapchat feeds – have become known for their relentless, near-unending recording of themselves, as well as for, crucially I think, the polished, produced surfaces of this documentation. Heavily done up, highlighted and buffed, surgically enhanced and tightened and plumped, hair smooth and shiny and made fuller with extensions or wigs, the Kardashian women (and this includes the younger sisters of the clan, Kendall and Kylie Jenner, alongside their father, Caitlin) are perennially camera ready – even, somehow, when they show the process by which they become so. Watching a YouTube makeup tutorial given by Kim or Kylie, say, where they recreate a favorite look from their arsenals, often with products from their own beauty lines, gives the illusion that they have their faces always-already on. It’s a collapsed-timeline domain where wealth and modern technology seem to have joined forces to form a new, rarefied species of woman.

To watch the sex tape now, however, feels like a revelation of the secret history behind the current Kardashian moment. In it, Kim is still beautiful, still made-up, still conventionally sexy, but it is as if her textures are right there at the surface, roughly visible. Her eye shadow is pronounced, shiny and caked on; the lace of her taupe-colored matching brassier-and-pantie set looks mall-coarse, itchy to the touch, her buttonish nipples emerging juttingly from the bra’s cups; even her pubic hair, groomed to within an inch of its life in a trendy early-2000s landing strip, appears bristly, tactile. If, in some ways, the semblance of touchability is one of the points of pornography, then the tape delivers. But what it also shows us, despite Kim’s nonchalant gum chewing throughout much of it, is some sense of the Sysyphean effort it takes one to play the role of a woman, or, really, even just a person (and here I’d add, an American person, by which I mean one tasked by the culture around her to act the part of a spectacular body in late capitalism). It tells us a story about the perceptible exertion it takes to get from the before to the after. This tactile effort is a primary preoccupation of Gina Beavers’s work. In her paintings of screengrabs taken from YouTube makeup tutorials, most directly, but, too, in her series of muscular male torsos and groins and butts, rising out of the canvas, literally built out into the space of the gallery, and even in her paintings of food – thickened visions of lurid American delicacies like an oversize oyster plate, blueberry pie, greens with brown sauce, ribs on a grill, red velvet cake, all as gross as they are enticing – the viewer enters into a world that is a heightened reflection of our already extreme reality, a world in which the touchable moreness we’re surrounded with manages to crowd itself – if barely – into the painter’s canvas. If Frank Stella first and then, more cartoonishly and arguably more effervescently, Elizabeth Murray, examined in their work how to break the limits imposed by the picture plane, abstraction turning increasingly Poppish as it burst forth past their paintings‘ conventional frames, then Beavers marries this tradition with the fleshly, grotesquely realist representational tactics of artists like David Salle, Eric Fischl or even Jeff Koons, all of whom came to prominence in the 1980s – the first overtly excessive American decade. The glutinous piling on of paint, though, is a distinct Beavers addition. When faced with a work such as “Food Porn! (Chicken and Waffles)” (2015) – in which puffed up, erratically craggy hills of acrylic representing crackling batter and skin abut and contrast with the uniform grids portraying syrup-drenched, heart-shaped dough – one swoons with a mix of revulsion and desire. Looking at Beavers‘s built-out images, the paint almost good enough to eat, one might come to understand the bulimic impulse – the dreaded, irresistible urge to ingest followed closely by the equally dreaded and irresistible need to dispose.

In Roald Dahl’s short story “Nunc Dimittis,” a rich old bachelor dates a younger woman who, he comes to find out from a gossipy friend, secretly despises him. Seeking revenge, he commissions a society portraitist to paint the girlfriend’s likeness, knowing that the artist’s technique involves first painting his subjects naked, then in their underthings, and only then layering their clothing on top. Stripping down the finished, bulked-up canvas, the bachelor exposes the awkward, grotesque vision of the woman in her corsetry, and then humiliates her by displaying it to their mutual society friends at a dinner. First elated but then quickly guilt-ridden in the days after the event, the bachelor is ultimately comforted when he receives a delivery of fine caviar from the woman, who assures him he is forgiven. While feasting on the enticing treat, however, he begins to feel sick. The woman, it is implied, has poisoned him: “Come to think of it, I really do feel rather ill all of a sudden,” he muses in the story’s last words.

The human body – desired and despised, enhanced and exposed on the canvas, indulged and destroyed in ways both delectable and poisonous – is germane to Dahl’s story, just as it is to Beavers’s painting. In “Cake” (2015), a bare, plump buttocks is riven by a cake server – laden, as in a nightmare, with a generous wedge of ass-cum-baked-good. The doughy slice, yellow within, butt-pink without, is balanced invitingly, horrifyingly, soliciting the viewer’s eye, as if to say: you’ll consume it, and you’ll feel ill, but if you survive, you’ll be back for more. It’s a cycle simultaneously destructive and productive, and it is Beavers’s work that tells us its story. It’s not just Kim Kardashian in Cabo in 2003, with her Seven for all Mankind jeans and crystal toe ring, but, to varying extents, all of us Americans. We make ourselves up only to strip down and then start all over again, the texture and history of past efforts always visible – an ongoing cycle that stops just on the precipice of disgust.

This essay by Naomi Fray was written for the monograph “Gina Beavers” (2019). 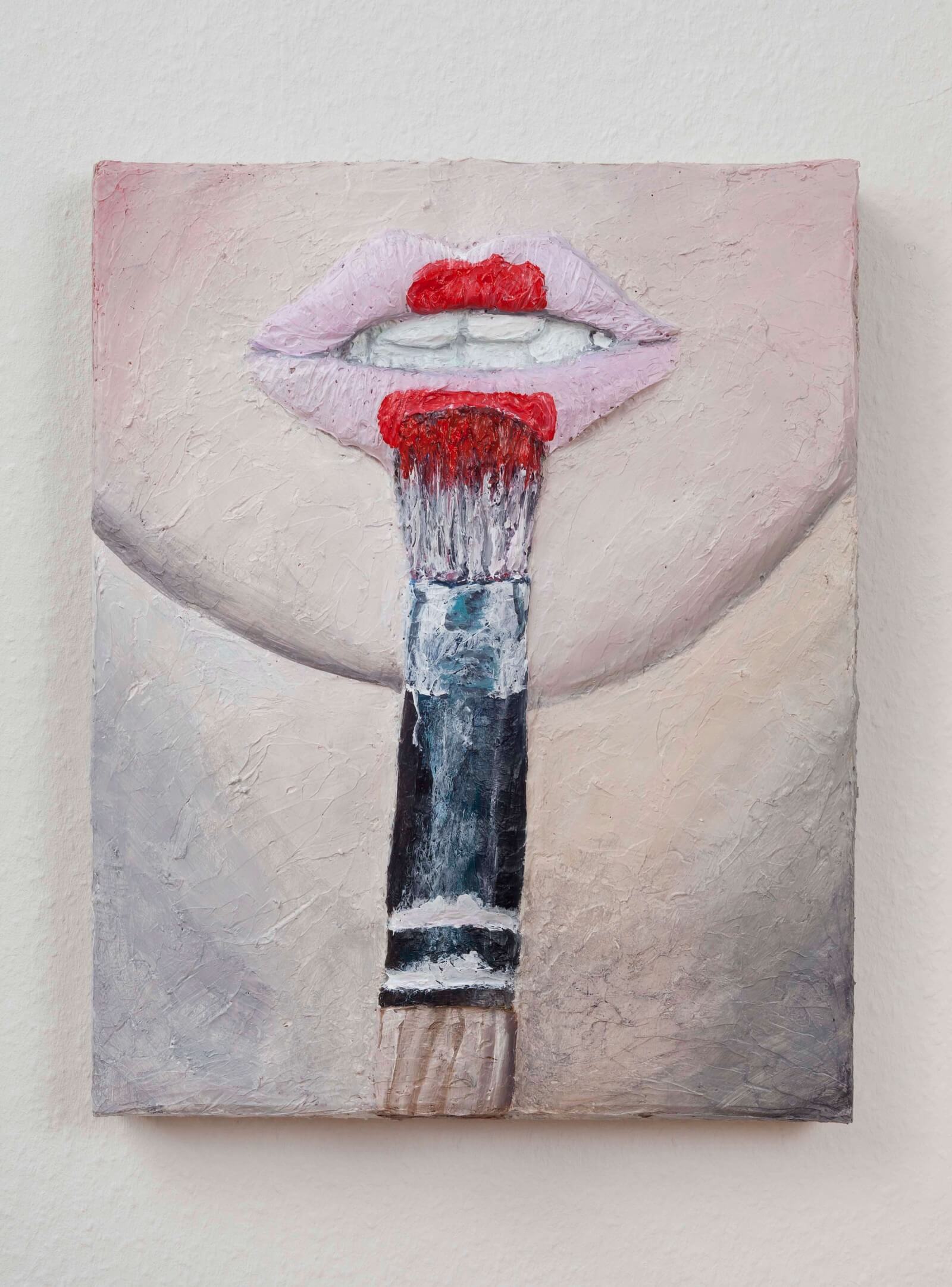 Gina Beavers’ primary source of inspiration is the ubiquitous contemporary visual culture, especially the one emerging from social media. Dealing initially with references taken from the original pop movement of the 1950s, Beavers evolved to paint the ‘current pop,’ starting to search on social media for image templates to her extravagant, thickly layered relief-like acrylic compositions. Beavers’ anthropological interest in society translates in paintings that explore the banality of internet: makeup tutorials, the so-called food-porn pictures, body builder selfies. In tune with the eccentricity of her artistic process, the artist maximizes the visual potency of her medium, taking tridimensionality to its higher possible level and bringing painting closer to some sort of sculpture.

In 2019 Beavers had a solo exhibition at MoMA PS1, and in 2020 she was part of a group show in the Frans Hals Museum, in Haarlem. She has a BA in Studio Art and Anthropology, and a MFA in Painting and Drawing. Her work is part of permanent collections, such as the Institute of Contemporary Art Miami (USA), The Tel Aviv Museum of Art (Israel), and the Whitney Museum of American Art (USA). Born in 1978 in Athens, she currently lives and works in New York.