Christopher Hartmann
I Will Heal

Will I heal is a question that many of us did not first stumble across during quarantine, where introspection became the sudden zeitgeist – though this stumble was most likely accelerated by unexpectedly having to deal with multifarious forms of loss. The watershed moment of the past decades was, without having to be named, decidedly a moment of melancholia but also of vulnerability, solitude, and intimacy. I Will Heal is Christopher Hartmann’s response to this juncture, which is not just concerned with lugubrious, tender, and lonely stages of quarantine but also with such that will continuously occur during one’s life – whether accelerated by global externalities or not.

I Will Heal, the exhibition’s title and simultaneously the title of the painting that has been the starting point of the show, sprouted from Hartmann’s reflection on interpersonal relationships, shaped by contradictory dynamisms, such as attachment and detachment or distance and intimacy. The painting shows two naked, lonely feet, which are laying on wrinkled bedsheets. Like all works in the exhibition, it radiates a polychromatic, however, not overwhelmingly colorful, luminosity and is yet streaked with a gloomy atmosphere, aptly illustrating the paradox feelings that accompany vulnerability and melancholia. By partially cropping the scenes depicted in his paintings, thereby concealing some of the figures’ (corporeal) parts, Hartmann makes his characters even more vulnerable. They expose certain parts of themselves but cannot reveal their totality, leaving us with the small excerpt the viewer gets to see. Their oversaturated flesh, reminiscent of filters and digital imagery vital to Social Media, is often exposed to the viewer’s gaze while at times covered with clothes. The garments Hartmann dresses his figures in – mostly real life friends and acquaintances – are ubiquitous while referencing (queer) contemporary culture, which makes them a vestige of the current zeitgeist. The movement of the clothes’ creases, the way they flow, adds a floating rhythm to the paintings, whose imperfections have otherwise been wiped out. They contain no visual unnecessities like blemishes on the sitters’ skin nor clusters of bulging paint. The paintings are not bedecked with pictorial elements but with the momentums they emit. They do not live off any superfluous adornments but off the memories and emotions they evoke.

Although some paintings portray more than one person, the focus is on the individual. For Hartmann healing means to find comfort, to move on from toxic relationships, and to start having a healthy relationship with oneself rather than obsessing over constantly being around and with other people. The way some figures hold themselves, gently touching their own bodies, is a form of tenderness and caressing, which does not hinge on someone else.

In Freud’s infamous essay “Mourning and Melancholia“ he draws the distinction between the two phenomena by arguing that they are both responses to loss, but in the state of mourning one is aware of the object or subject one mourns, whereas during melancholia one is unable to identify the particular loss. He considers melancholia as pathological. But is it really that? Is melancholia a disease? For Hartmann, whose works intertwine melancholia and mourning, they are the beginning of healing and introspection. The polished, slick imagery in I Will Heal sets a heedful bedrock for these personal processes. Being lonely evolves to being lone-ish to being comfortable-ish with oneself to developing the ability to give oneself tender comfort. 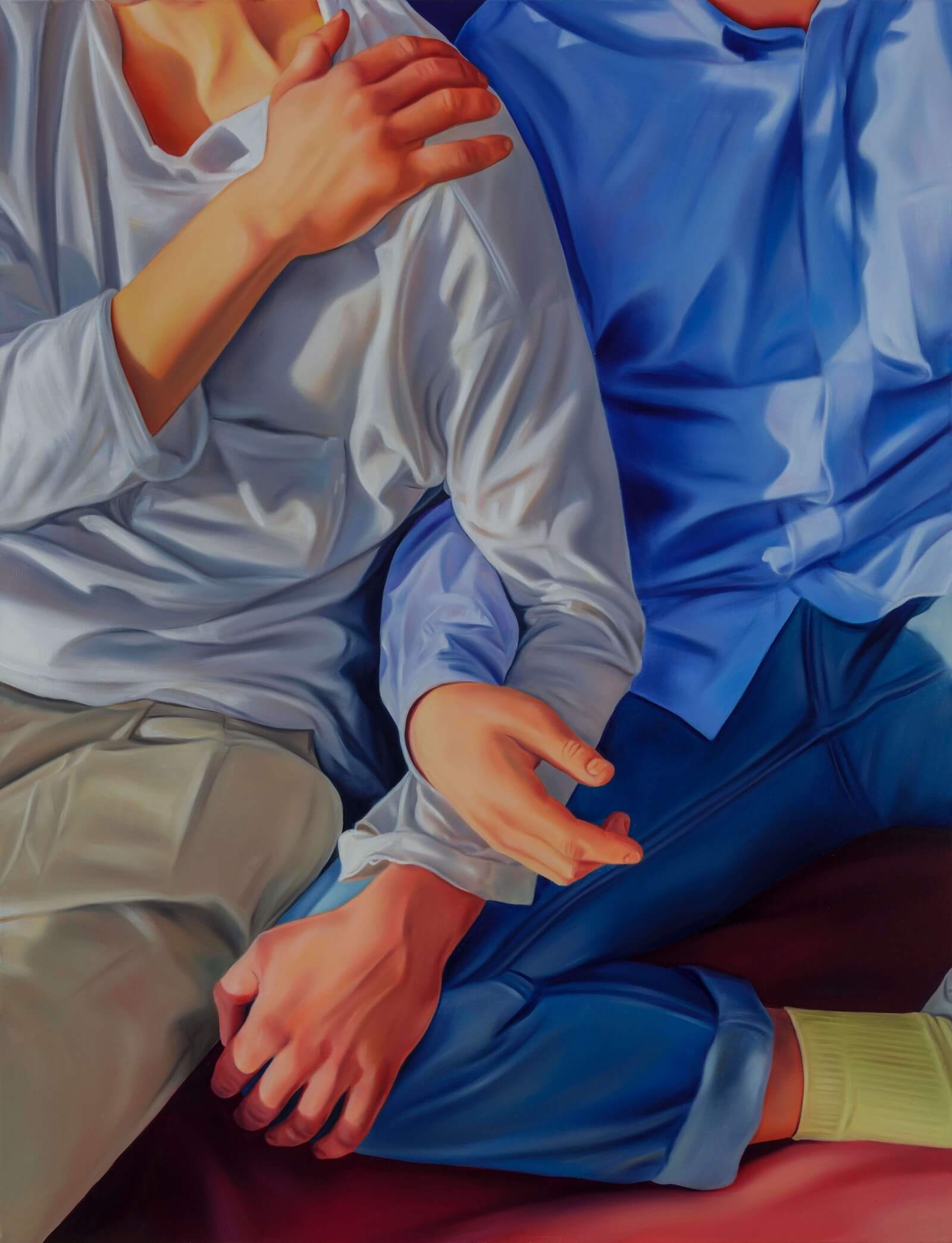 Christopher Hartmann was born in Germany in Germany in 1993, studied in Barcelona and currently lives and work in London. He holds an MA in Communication Design from Central Saint Martins and a MFA in Fine Art at Goldsmiths University London. In his work, he is interested in depicting complex relationships shaped by alienation, intimacy and emotional attachment/detachment; in which a seemingly tender touch speaks of distance and rejection. Hartmann exhibited his work in Antwerp, Tel Aviv, Berlin, and London. He was a nominee for the 2019 HixAward and is a recent grantee from the Elizabeth Greenshields Foundation (2020).