Born in 1987 in London, Irvin Pascal was already filling entire sketchbooks while still in school. Since then, his obsession with art has completely taken hold. Portrait painting was his first passion; he drew inspiration from masters of the genre, like British painter Lucian Freud. But after successfully completing a Bachelor’s degree in architecture, Pascal initially pursued an entirely different interest: boxing. Pascal was a professional boxer until an injury forced him to retire from the ring. Outside the ring, however, he continued using artistic means to process his experiences. Finally, in 2017 he completed an M.F.A. at University of Brighton.

Meanwhile, his art has taken a different direction. When Pascal paints portraits today they have a symbolic character and a different visual language. His body of work also includes several self-portraits, like Self-triptych, which consists of three photographs. In each one he stands on a Marshall amplifier, holding in his left hand two large balls strung from cords; his clothing and facial expression vary slightly in each picture, as does the painting on his bare chest. In the background is an African-seeming mask. It is in fact a work by Pascal, portraying Jean-Michel Basquiat, the African-American artist. In these three photographs, a play of references to African and Western culture – also in their relation to one another – is woven between the objects and Irvin Pascal himself. The triptych is an excellent example of how Pascal negotiates questions of identity as a black man in a Western-oriented, postcolonial society. In works like Dance around the corner like i’m cassius clay he advances the hero status of black athletes like Muhammad Ali (born ‘Cassius Clay’), while also indirectly referencing the work of Basquiat. The late painter portrayed similar role models, thus keeping them alive in our collective visual memory. This act – offering guiding lights to a younger generation – propels Pascal forward in his own work. Among his artistic idols, Pascal has also named Abstract Expressionists, as well as figures associated with the School of London and Young British Artists. He thus draws inspiration from an enormously broad range of figurative and abstract painting styles, as well as new-media art. Music is an additional significant source of inspiration to him. Fela Kuti and Bob Marley, but also Skepta, Drake, and even contemporary pop songs find their way into Pascal’s work.

Impulses from extremely diverse artistic directions can thus be recognized in Pascal’s approach. This is one reason why his art wilfully blurs classic boundaries between genres and art forms. Aiming to dissolve the traditional division between painting and sculpture, Pascal has even developed his own material: Pascollar. It can be formed like clay or plaster, but it surpasses these materials in stability, durability, and value. Furthermore, unlike metal, which is subject to the influence of a foundry, Pascollar is shaped by the artist’s hand alone. Pascal’s sculptures have their own ‘signature style’, akin to the individual brushstrokes on a painting that reveal the identity of the master. The versatility of Pascollar is even demonstrated in the medium of painting. He thus ultimately opens a new dialogue between his two and three-dimensional works. Another significant feature of this material lies in its key ingredient. By producing the material with his own hair, Irvin Pascal attempts to counteract the economy of violence underlying the expenditure of resources inherent to all forms of industrial production. His considerations are guided by philosopher Hannah Arendt’s dissections of violence and power. Although Pascollar naturally contains other substances as well, at least one – human hair – is produced abundantly and dispensed with voluntarily at the barbershop. Since Pascal exclusively uses his own hair, there is a direct physical connection between the artist and the work.

Pascal’s intensive labour on – and with – Pascollar clearly demonstrates the significance of material and structure in his art. They are just as crucial to its aesthetic as the content it depicts. In Top Pick, for example, an abstract face and organic-seeming materials coalesce in imagery which recalls African masks. But Pascal has set a trap here, letting viewers be taken in by their own prejudices: the woven Burberry logo reveals that any associations made with ethnographic objects are only an illusion. This approach can be found in many of his paintings and sculptures. In order to reveal stereotypes and thus broach postcolonial problems like negotiating identity, Pascal makes use of a unique stylistic mix of both Pop and traditions thought of as characteristic of African or tribal art, like masks, totems, and ritual objects. There is, however, always a playful element in all of this. Pascal reaches the viewer with his wry humour. But because it is delivered hand in hand with serious themes, it is bittersweet. This kind of confrontation catches the viewer off-guard, and inevitably provokes reflection. In this way, The sweetest taboo proves to be a humorous examination of the taboo against making assumptions about culture on the basis of skin colour; by breaking that taboo Pascal makes us aware of our own stereotyped thinking. 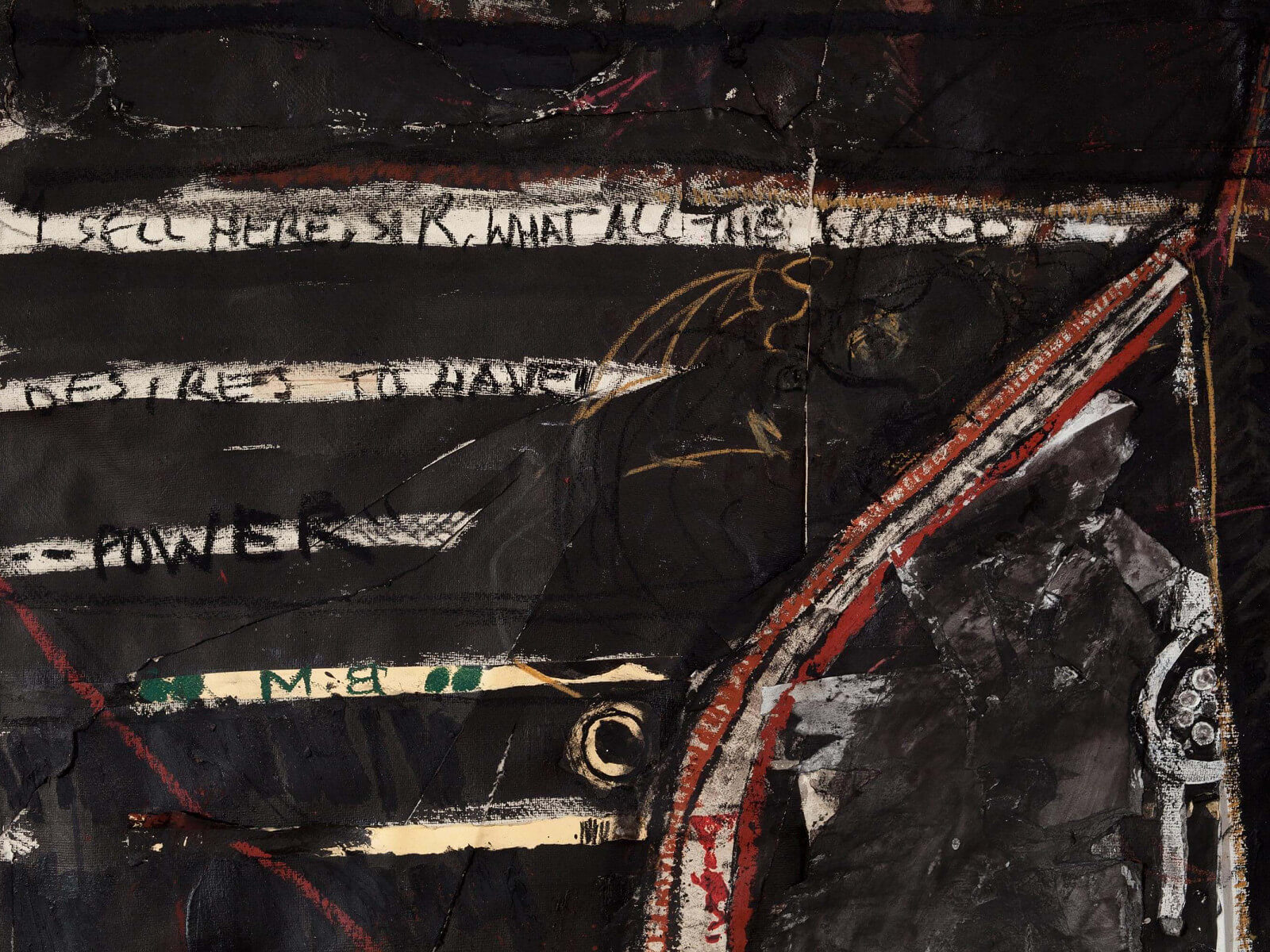 Irvin Pascal’s paintings are made from different organic materials and paint, a combination that generates texture variations and lends the works a collage appearance. Pascal’s figurative canvases deal with his African-Caribbean family roots and his personal path, including his past career as a boxer. The artist also references himself in his works by using a unique sculptural material, which he calls Pascollar, made of a mixture using his own body hair. Besides painting, drawing and these sculpture, he also works with performance and photography.

Irvin Pascal was born in 1987 in London, England. He has BA in Architecture and a MA in Fine Art, both acquired at the University of Brighton. He lives and works in Sussex, England. The artist was one of the Bloomberg New Contemporaries for 2017.