One way we navigate the world is through face reading, an utterly simple enterprise apparently shared by almost all cultures. By doing that, we learn to internalize emotions, distancing the sympathetic from the unsympathetic, deciding what we value and what we don’t. When configured as art, these same faces, gestures, and postures generate at the same time one of the most elementary and most complex of all artistic genres. Such an understanding of portraiture art may aim at universality, a comprehensive delineation of what’s behind — or in front — of these women and men, known and unknown, looking at us and being looked at by us, the curious bystanders. Still, this idea seems to fit particularly well when we come close, face to face, literally, with Jocelyn Hobbie’s works. The characters represented on her paintings and works on paper — with their ambiguous expressions transiting from the blasé to the self-confident, from the pensive to the attentive — not only provide a glimpse into the fissures of human nature. Though concealed at first, the way Hobbie maneuvers the portraiture genre also articulates something on the visual arts as a whole. Her works, shown here for the first time at GNYP Gallery, suggest something on how we steer the world of faces, expressions, and desires at the same time that they establish a stimulating conversation with the cannons of art history.

The manner in which the portrayed figures merge with the radiant background is noteworthy. Capturing and engulfing the subjects, the flowers, sometimes stylized, sometimes resonances of actual specimens, suggest a harmonious blending, a texture that blossoms either like a dream or an enhanced window to the soul. Delicate as these works are, a petal could not be removed without jeopardizing the composition altogether. In this regard, some of Hobbie’s assumed influences indicate the nexus between the structural sensibilities and the ornamental artifices operating in her work: Ukiyo-e, the Japanese prints and paintings saturated with color and detail, and Hans Holbein, the German Renascence portraitist master. Whereas the former laid the basis for a dynamic relationship between model and environment, outlining the specifics and potentialities of the human gaze, attentively examining the world around it, the latter lends Hobbie an organic approximation between colors and elements, concrete and imaginary. Though incongruent at first sight, these two influences demonstrate the rich mixture of aspects at play in Hobbie’s compositions; they illustrate how simplicity, in art as in life, is often made of complex clashes and unexpected approximations.

Nonetheless, to rationalize as much about Hobbie’s work seems to betray a fundamental fact about her poetics. Even if what informs her portraits points to the history of the genre and the ambiguities of human behavior, it is also true that they disseminate an aura that’s better apprehended when we encounter them unguarded. After all, as the artist herself claims, she hopes her works can inspire the possibility of delight. Given the immense potentialities of the portrait, it means the world — literally. A world made of sensual encounters, beauty, and consideration for the next. 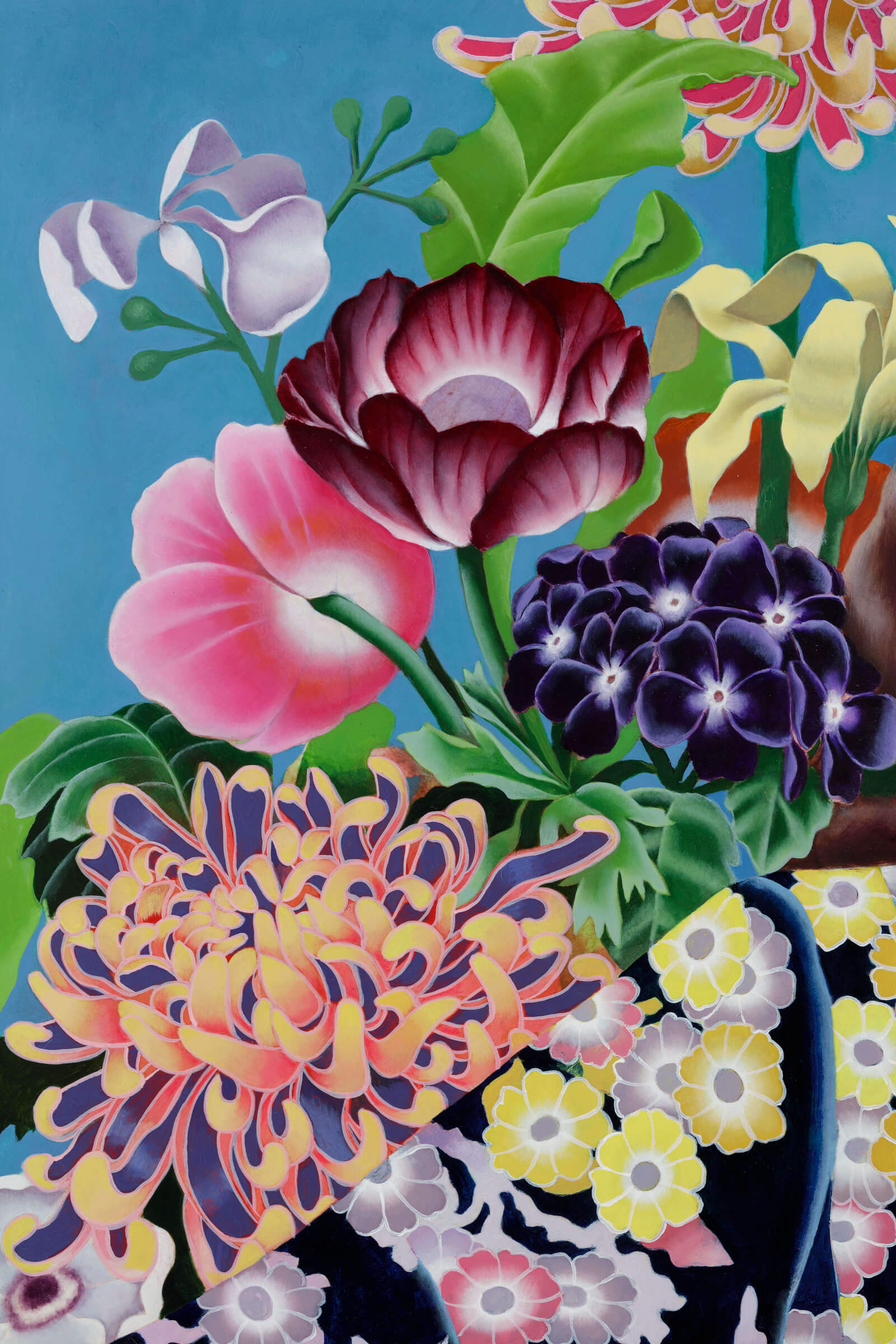 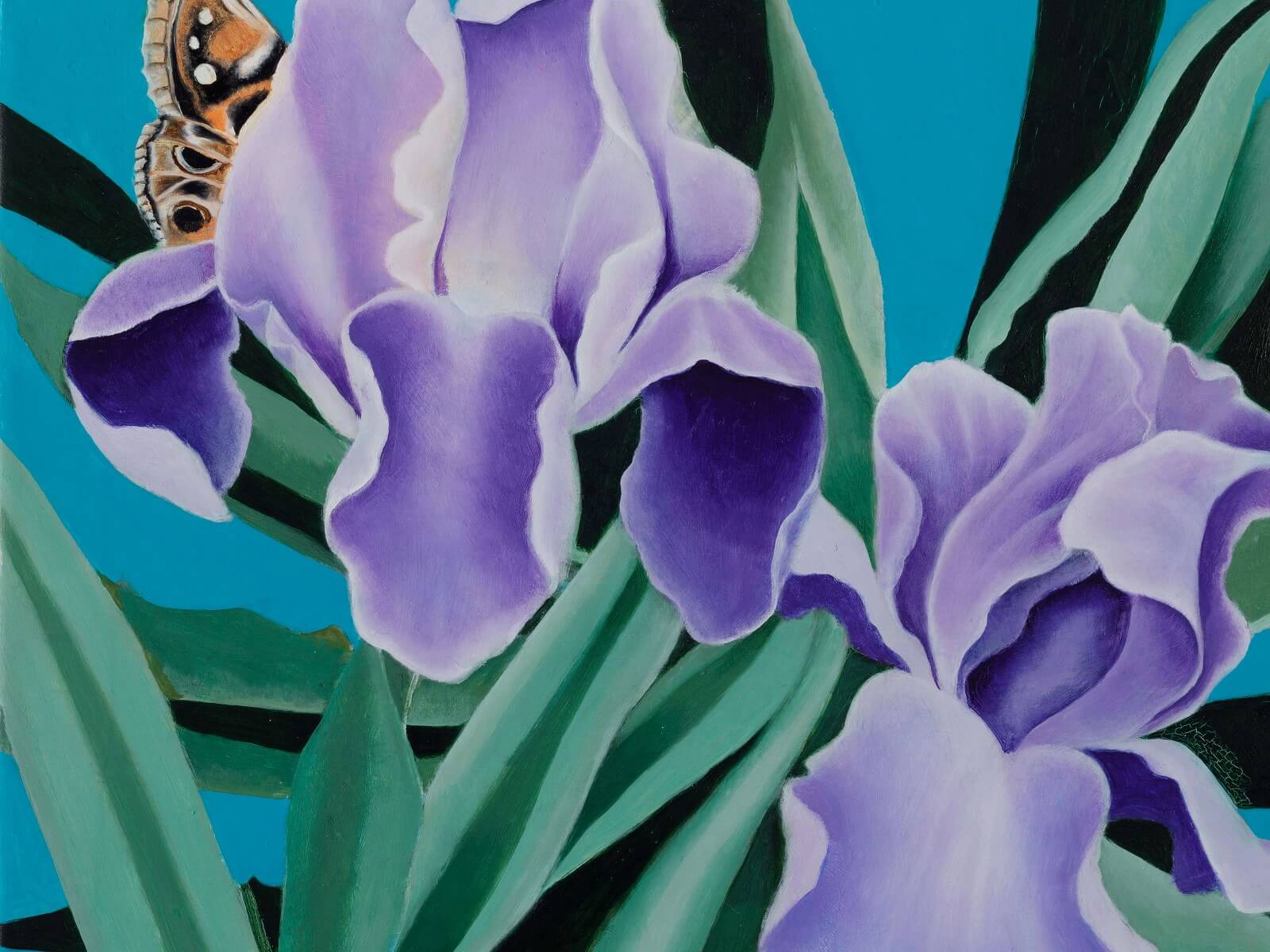 Jocelyn Hobbie‘s figurative paintings fuse themes of mortality, eroticism, and a persistent disaffection with contemporary life. Echoing styles as divergent as the expressive figuration of New Objectivity and the layered patterning of Ukiyo-e, Hobbie hones a formal inventiveness in which neoclassical figures are depicted amid bold patterning and vivid floral settings. Her heightened naturalism and enhanced degree of saturated color reveal a sensual aura that reinforces the subjective aspect of the characters in the pictures, inviting one to wonder about their nature. In addition the naturalist background setting, with elements of fauna and flora, works as ornamental artifice and structural organization — not without an element of fantasy.

Jocelyn Hobbie received her BFA from the Rhode Island School of Design and also studied at Studio Art Centers International in Florence, Italy. She was born in 1969 in Northampton, Massachusetts.