Expressive colours, large formats, abstract forms and a confrontation with the latest crises in the globalised world characterise Serge Attukwei Clottey’s artistic practice. His second solo exhibition in Berlin shows drawings and wall works, focusing on pressing social, political and environmental issues that are taking place on a local level in Accra and are yet inextricably linked to migration and extensive commodity trading worldwide.

Clottey is one of many contemporary artists coming from the periphery of the art center but working and exhibiting internationally. Nonetheless, to understand his artistic practice the following assertion of Okwui Enwezor is of pivotal significance: ‘I think it is important that we hold on to things that are specific to the subjectivity of the artist and to locations of practice that cannot be simply erased by the idealism of a global art scene that has no boundaries.’ Using yellow plastic gallons—in Ghana also known as ‘Kufuor gallons’, named after former President John Agyekum Kufuor who had water distributed in these containers during a serious drought in the early 2000s—as his artistic medium, Clottey is not the only artist working with found material potentially contributing to plastic pollution and linked to water scarcity. The well-known Ghanaian artist El Anatsui uses pressed bottle caps for his large-scale installations. Though both practices deal with different topics, they affirm the status of plastic as an important artistic medium that—just as in all other parts of human life—has come to stay. Whilst provoking reflections about consumption patterns, the beautifully composed wall installations made up of plastic pieces and copper wire invite for a detailed study of the assemblages that reference their origin through odd stickers and paintings. With the extended lifecycle of his objets trouvés, Clottey’s artworks are transformed into cultural archives, following Griselda Pollock’s reminder that ‘Archives matter. What is included shapes forever what we think we were and hence what we might become.’

Clottey’s charcoal drawings re-appropriate the use of African masks from the colonial Western artistic practices of the twentieth century, most prominent in Pablo Picasso’s African Period, by assigning the traditional African mask to its contemporary context through replacing the carved wooden specimen with the top of plastic containers. Inspired by the Spanish painter, Clottey started to draw large-scale abstract figures which often appear in front of dooming black backgrounds made of rough strokes. In his drawings as well as in many of his performances, the human figure takes central stage and modes of gender representation are negotiated. Similar to Les Demoiselles d’Avignon, Clottey’s Femme vibes (2019) portrays naked women wearing African masks, but while Picasso’s figures co-exist independently of each other, Clottey’s female appearances are intertwined by touching arms and bodies. Picasso slightly indicates the figure’s chests and paints some of the figures’ faces, whereas Clottey draws voluptuous breasts and the figures’ heads are hidden behind yellow plastic masks with over-accentuated red mouths, referencing their sexuality and hinting at same-sex desires. In contrast to Picasso’s use of skin tones for his figures, Clottey, like in many of his drawings, applies primary colours—an artistic choice which might be connected to Clottey’s experience of first feeling his colour in Europe, stating that ‘In Ghana, we don’t talk about colour. We don’t care. When I went to Austria for the first time, I actually started looking at myself because people were treating me very differently.’ Building on Western art history, Clottey thus questions hegemonial representations of gender and race, highlighting the mobility of thoughts and ideas through space and time.

In his lifetime, the Nigerian writer Chinua Achebe proclaimed the need for a global ‘balance of stories,’ encouraging every people to tell their own story as a means to reclaim power and avoid a victimisation through other people’s accounts, particularly in the light of a westernised one-sided view of Africa. Serge Attukwei Clottey’s multi-layered and locally rooted artistic practice can be read as a step towards such a sensitive balance of stories within the art world. 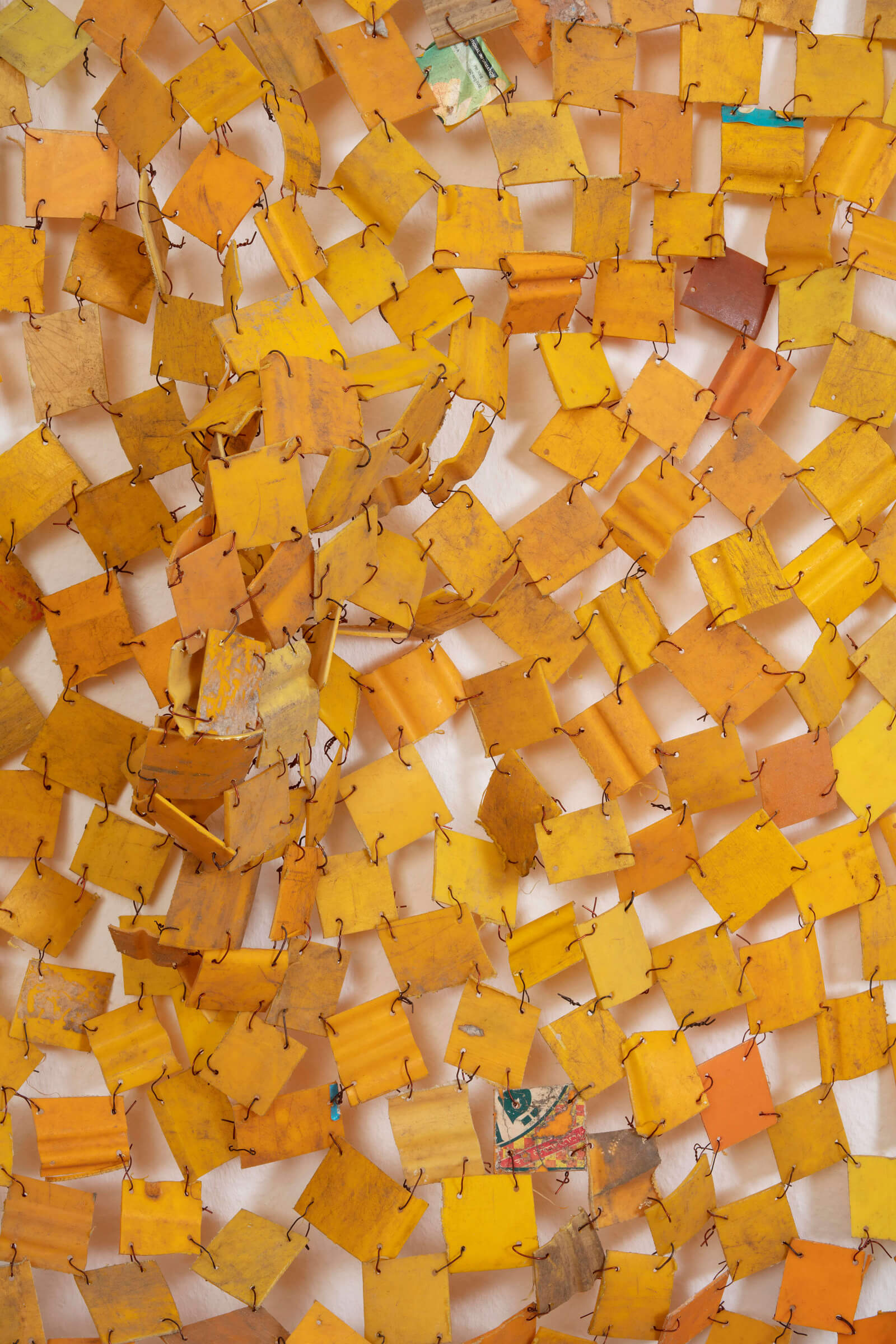 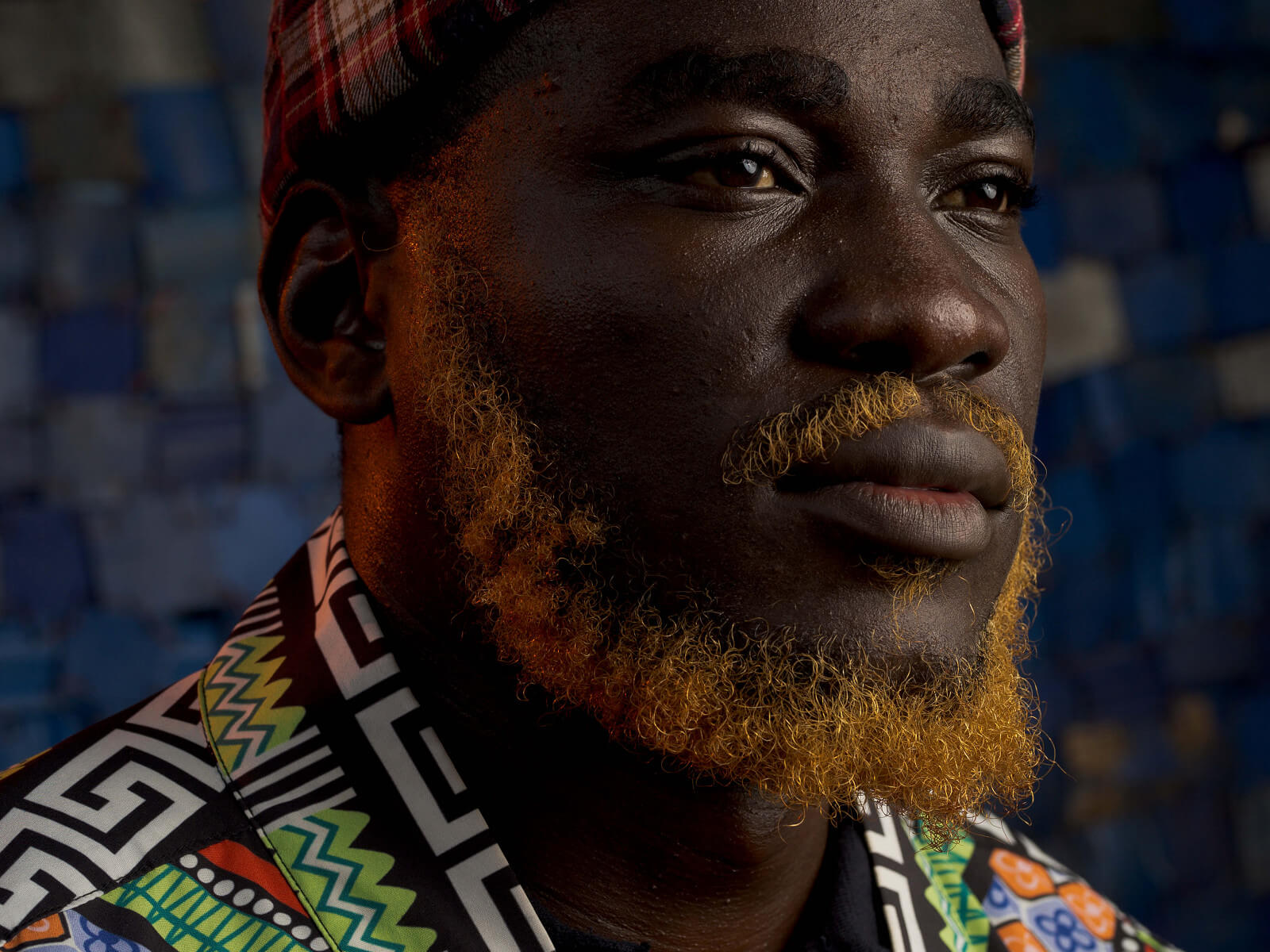 Serge Attukwei Clottey works across installation, performance, photography and sculpture, exploring narratives of personal, family and collective histories, which often relate to trade and migration. Clottey is best known for his gallon works. These are wall sculpture pieces, net-like objects that are made of several plastic fragments stitched together. These plastic fragments come from (mostly) yellow gallon containers, used by some populations in Africa to collect and store water, when access to piped water is nonexistent.

Serge Attukwei Clottey was born in 1985, and he lives and works in Accra, Ghana. In August 2019 he received the award of Honorary Doctorate of Arts from the University of Brighton.