Wojciech Fangor
A Portrait of the Artist

Gnyp Gallery has the great pleasure of presenting a selection of works by the Polish American artist Wojciech Fangor (1922–2015) spanning a period of forty years. For the first time the Berlin public will be able to follow the artist’s development from his early paintings made during the 1940s through various phases of his artistic investigations until the 1980s. Fangor is not unknown to the city; in 1965 he was a participant of the Ford Foundation Berlin’s Artists in Residence program and had a solo show at Galerie Springer the same year. This exhibition attempts to give some insight into Fangor’s very rich and diverse oeuvre that has extended over 70 years, two continents, and various artistic mediums.

The personal life and artistic career of the artist have been inseparably linked to the grand historical shifts of the 20th century. Born in Poland to a wealthy industrial family, Fangor got the opportunity to develop his remarkable talent from a young age. The Second World War, however, formed the first breaking point in his life; not only did it disrupt artistic education but it also resulted in a new political system, which in turn pushed the young artist into the only artistic style possible, socialist realism. Despite successes as a celebrated socialist realist painter (he produced the famous propaganda painting Korean Mother from 1952) Fangor shifted his attention to spatial experiments, often cooperating with his architect friends. Exploring the spatial possibilities of art in general and painting in particular, in 1958 Fangor constructed A Study of Space, the first “environment” ever made. After this exhibition, the director of the Stedelijk Museum in Amsterdam, Willem Sandberg, invited him to make a similar work in Amsterdam, while the American gallery owner Beatrice Perry offered him a show in the US.

Gradually, Fangor found his own artistic language that aimed to make abstract paintings that create a physical impact in space. Fangor: “I discovered that my paintings with diffused edges of color and shape create a spatial illusion, which is not directed to the inside of the surface (like perspective), but extends in the opposite direction toward the outside of the surface into the real space between the painter and the viewer. A new kind of spatial illusion. This discovery might have originated from my interest in astronomy and my fascination with optical instruments, with the effects of shifting the image in or out of focus. But it took some time to find the rational theory of this phenomenon. All important discoveries originate from unconscious intuition.” Later on he will discover that despite his isolation his works have connected to the most interesting Western artists such as Joseph Albers or Mark Rothko; the former being a big admirer of Fangor’s abstractions.

In the period 1951–61 Fangor was also active as a designer of posters, which later became known as the Polish Poster School. Using collages, texts, drawings, and photography Fangor succeeded in creating his own graphic language of symbols and metaphors, which is relevant to this day. Fangor quickly realized that the communist system was a utopia but it took several years before he could leave the country. Residencies in various parts of the world offered him the possibility to extend his artistic investigations. After short stays in Vienna, Paris, Bath, London, and Berlin, Fangor finally ended up in the US together with his wife, Magdalena Shummer-Fangor. In New York he participated in important exhibitions such as The Responsive Eye at MoMA in 1965, and had a solo exhibition at the Guggenheim Museum in 1970. Although Fangor’s mature abstract circles, waves, and squares rendered using his outstanding painting skills were well-regarded, the artist embarked upon a new phase of painting in the 1970s in which he explored figuration. In this time he conceived for example the so-called TV paintings that related to the omnipresence of the mass media and their intermediary role in perceiving reality.

Perhaps due to his job as professor at the Fairleigh Dickinson University in New Jersey, comfortable sales of his works, a happy private life, and his aversion to groups, Fangor never became a member of the New York art scene and never undertook efforts to be visible in the art discourse. After his retirement from the university and a period in Santa Fe he returned to Poland in 1999; he continued making art until his death.

In cooperation with FANGOR FOUNDATION 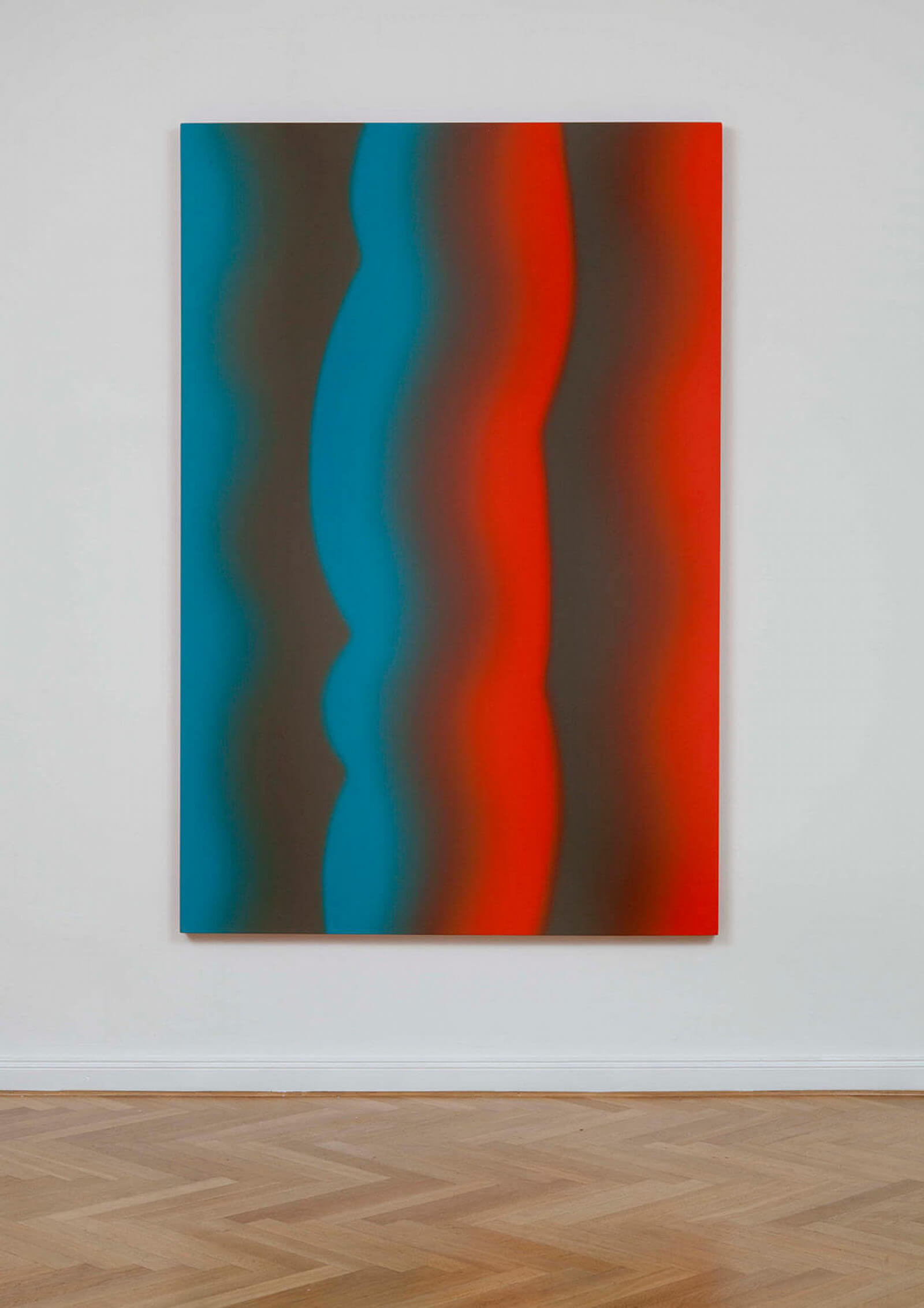 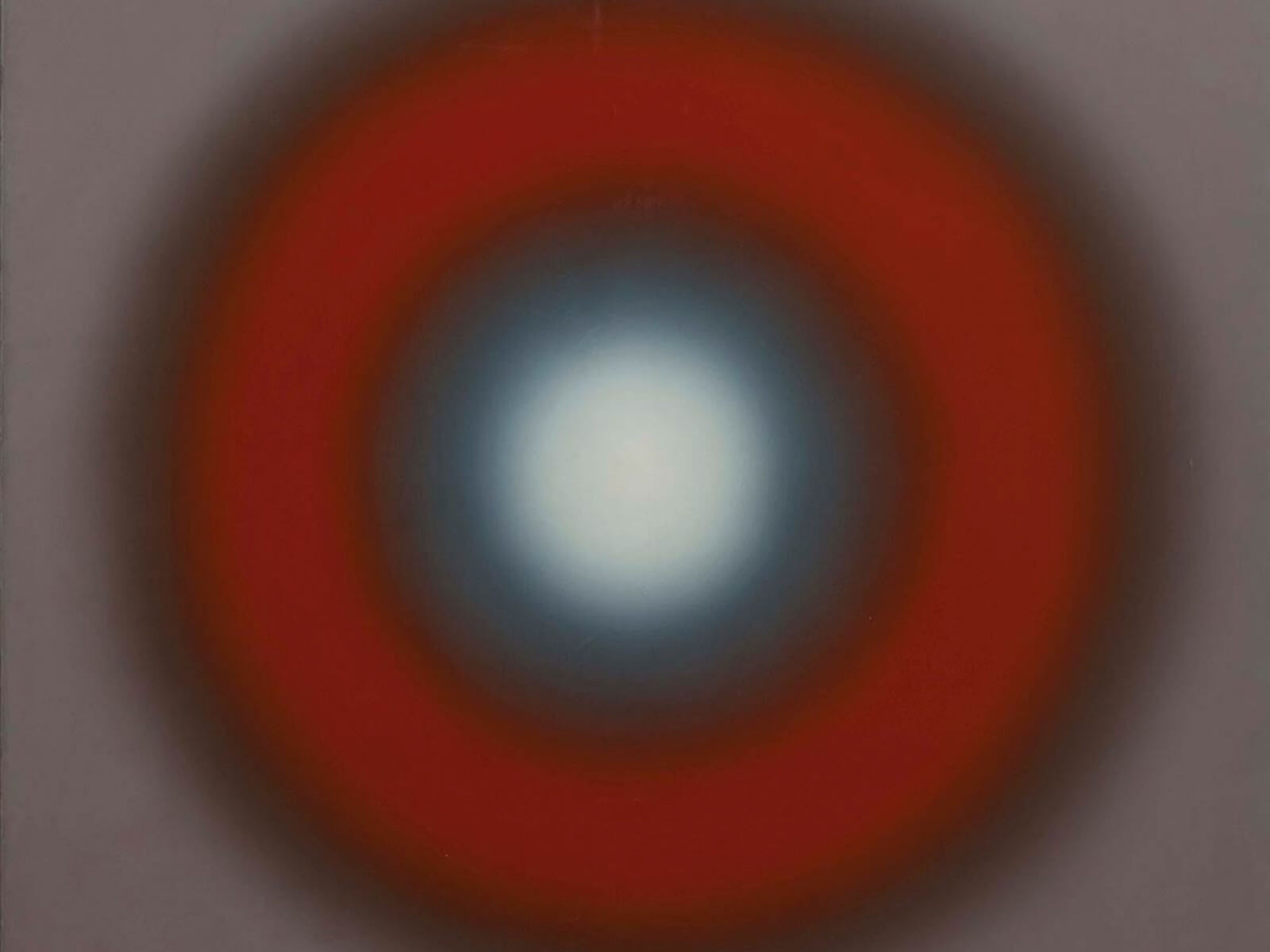 Wojciech Fangor (1922-2015) came from Warsaw. His artistic education was disrupted by the Second World War, which later on pushed him into practicing socialist realism as a painter. Between 1953 and 1961 he was employed as assistant professor at the Academy of Fine Arts in Warsaw. At the same time he was also active as a designer of posters using collages, texts, drawings and photography, and became one of the founders of the Polish School of Posters. Although successful in these fields, Fangor decided to shift his attention to spatial experiments. In 1958 he constructed the first “environment” ever made, A Study of Space. These experiments gradually resulted in his abstract illusionist paintings with diffused edges of color and shape. After short stays in Vienna, Paris, Bath, London and Berlin, Fangor moved to the US in 1966, where he participated in important exhibitions such as ‘The Responsive Eye’ at MoMA in 1965, and had a solo exhibition at the Guggenheim Museum in 1970. After his retirement as professor of art at the Fairleigh Dickinson University in New Jersey, he returned to Poland in 1999. He continued to make art and in 2014 designed murals for the station walls of the Warsaw Underground. He died in 2015 near Warsaw.