Zachary Armstrong’s works hark to a childhood creative Elysium. The 32-year old artist, who lives and works in Dayton, Ohio uses children’s drawings, both of his own making, and of his friends as the base for his large-scale encaustic works. For this particular exhibition, his first solo at GNYP gallery, surrealistic, figurative encaustic and oil works of monstrous faces abut with wood and encaustic sculptures of fish. Crooked teeth, multiple eyes, distorted features assault the visitor in a parade of the absurd. “I have never felt more of an artist than I did when I was nine years old, drawing with my friend Keith,” the artist says – and the namesake series “Crown for Keith” is based on a drawing this friend made as a seven year old. “All the best drawings I did when I was young, I didn’t overthink everything, ” he says. His aim is to build on these drawings, to give them an adult life. “When you’re a child, you draw sinister subjects, monsters – its about the possibilities you have with eyes, with the features – much more space for imagination and creativity.”

Armstrong works and reworks the motifs, aiming to exhaust the image, experimenting with scale and technique. He likens his approach to Andy Warhol’s serialism, stating that the repetition of the same motif enables him to exhaust the pictorial possibilities inherent in the subject. Thus reworked, the images rid themselves of notions of the original, an involuntary negation of Modernist questions of artistic originality. As the artist has said “I don’t make anything up.” Yet via the use of colour, via the mutation – he alters the naïve motifs, replacing features with objects, so that mouths are detourned as fish or socks – imbues the images with significance above and beyond the Art Brut of children’s art. He envies the naïve freedom children have in their creative processes, as soon as art is made for public display and sale, self-criticism and self-doubt restrained him from being entirely free in his subject choice.

Armstrong’s choice of encaustic as dominant medium also owes a debt to his subject-matter, choosing the imprecise, fuzzy impression of lines fused via layers of wax melted together over the hard outlines of oil or acrylic paint. The shifting layers are treated like clay, lending the work a sculptural aspect, and Armstrong uses pottery tools on the wax.

A final element of the exhibition are the fish, a recurring motif originating with the piece “Crown for Charlie,” where the artist replaced a monstrous mouth with a fish, then developed the motif over a series of sculptures. They are intended as counter-point to the darkness of the encaustic images.

Of course one could imbue this appropriation of childhood monsters with a Jungian reading, an expression of the surpressed inner demon: Armstrong often refers to his works as ‘frightening’, given their subject matter and scale. But that would be to misconstrue the artist’s intentions: he has no recollection of the original motif, and to him, monsters are simply one of the more interesting, original subjects for children to draw, and therefore, for him to appropriate in his mature practice. 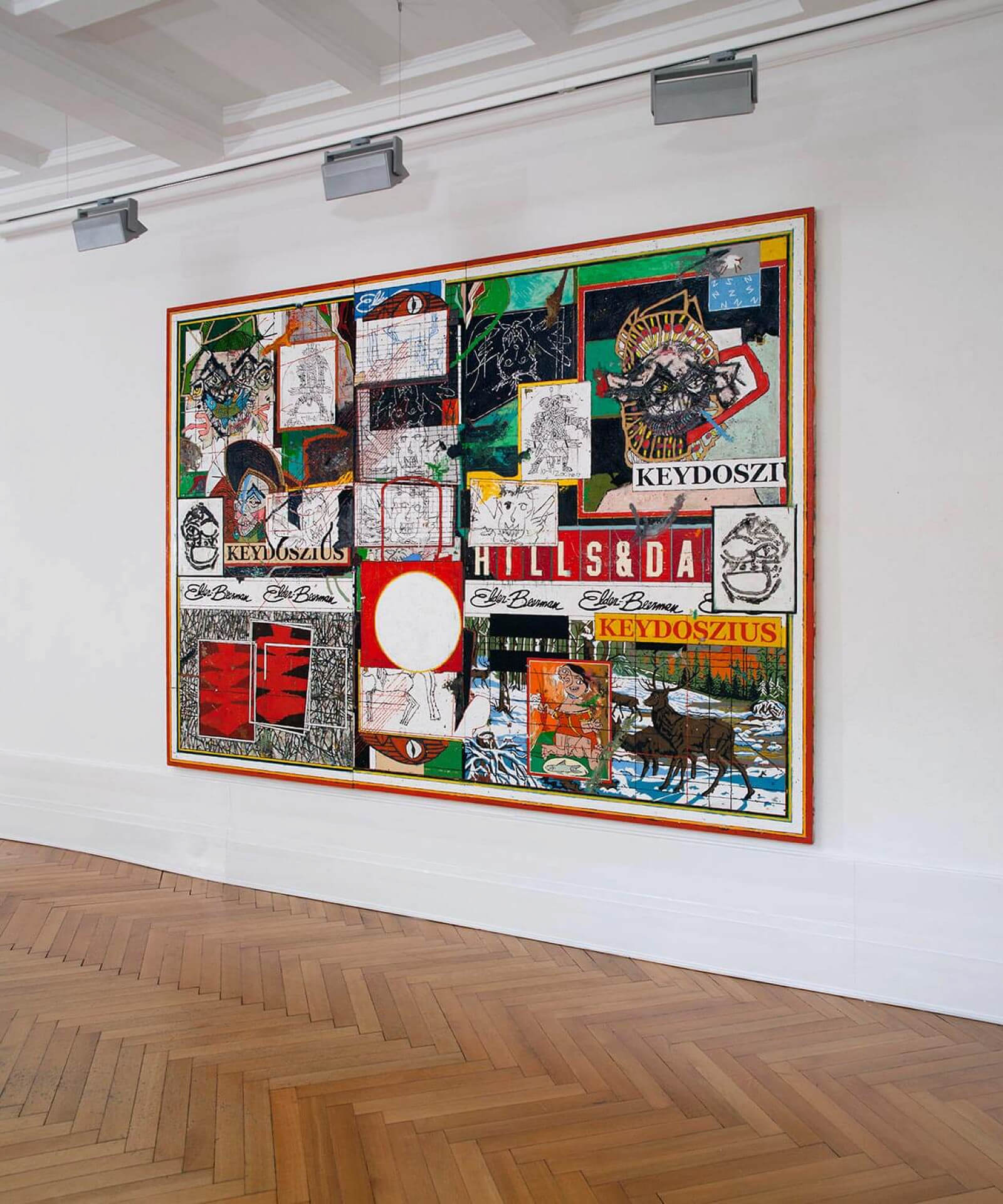 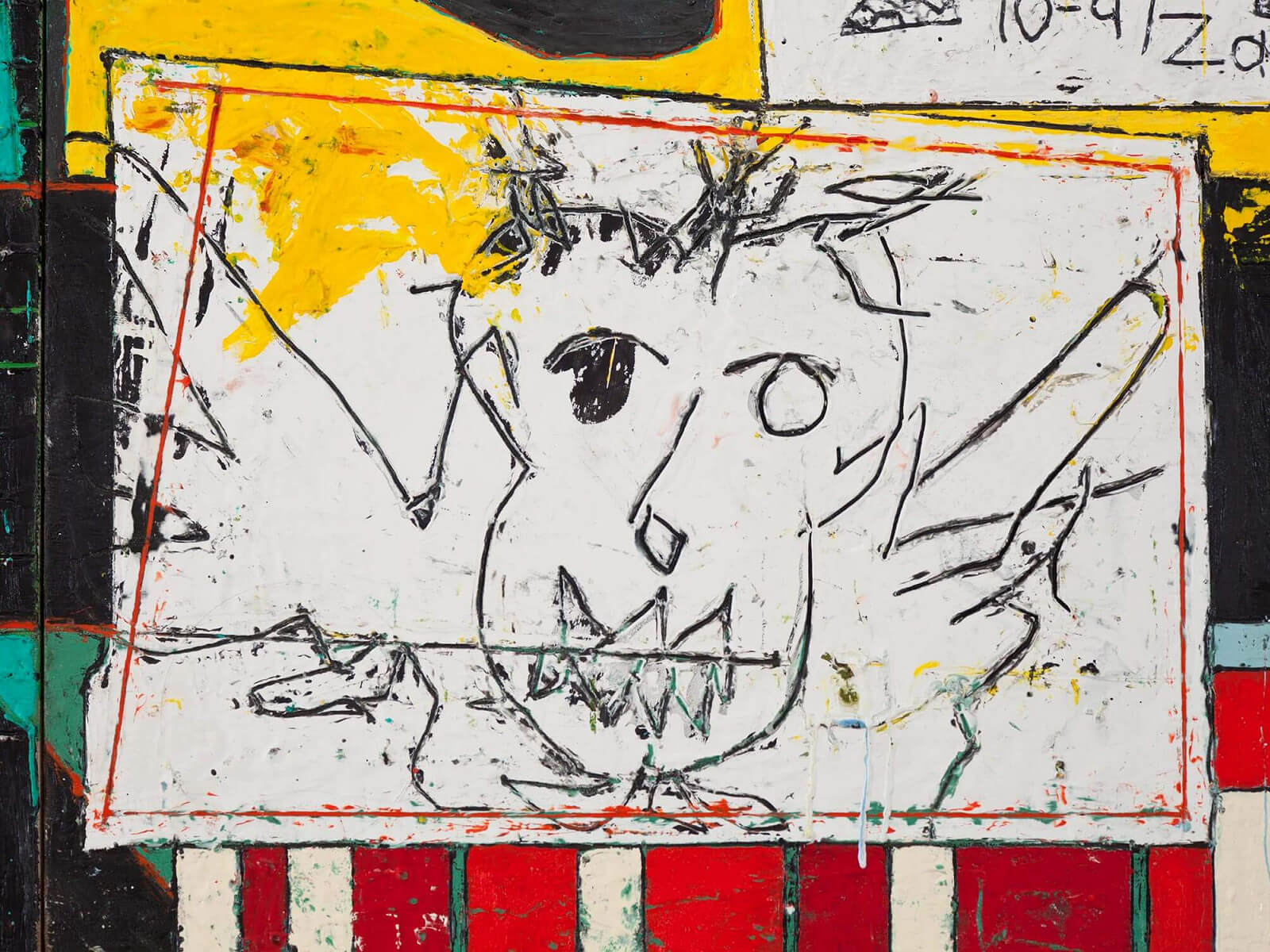 The point of departure of Zachary Armstrong’s art comes from his own private sphere: his childhood, his family, the American culture, natural history books he encounters. Armstrong’s works seem to contain a coded message about the person who created them, something that becomes evident when a motif is repeated and extended throughout several paintings and series, like a mannerism or a stain that’s part of us. However, while making secret references to his personal universe, his works also evoke some larger context, such as the idea of the American countryside, folk art, and the tradition of American and European modernism, reaching a bigger set of references that points to the universal.

Armstrong’s paintings combine geometrical structures and expressive figuration. One of the most particular aspects of Armstrong’s works is the use of encaustic technique, rendering them sometimes sculptural. Zachary Armstrong was born in 1984 and he currently works and lives in Dayton, Ohio.