A great encounter is planned to take place. Even though someone seems to have stolen a piece of cake here, sipped a bit of a cocktail there, most of the food is still untouched. For now, we are the ones missing. Conjuring a comprehensive array of references, rendered visually in the canvas through citations, style, and form, Kate Pincus-Whitney employs an apparent everyday setting—the dining table—as a portal or stage through which we navigate art and cultural history, a place where everything and everybody meet. Including the artist herself.

To navigate these canvases, Pincus-Whitney’s encyclopedic influences are key. Through a dynamic conversation with cultural history at large, the artist—presenting her works at GNYP Gallery for the first time—proceeds via a deep intellectual and associative engagement. Pincus-Whitney’s paintings are not preoccupied with simply listing off culturally loaded objects, instead she weaves together a triangulation of connection, each painting acts as its own narrative microcosm in hunt of deeper existential relationship.

Pincus-Whitney’s paintings act almost as hermeneutic diagrams of narrative and communication with the viewer; creating meaningful and nuanced connections between the object identity of things that fill our everyday lives and their associative psychological, historical, and narrative power.

Take, for instance “Paradise à la Carte: Night Studio (I drag My Bones to Bed)”. What presents itself first is a brightly colored horizontal tablesscape set at night, filled with a seemly random array of brushes, books, Chinese take out; the world is lit with a variety of hanging lamps and candles. As you move closer, a Warholian Campbell’s soup can filled with a cactus comes forth, a Lillet bottle hides behind an open sketch book-laying empty- awaiting its author to fill it. A full cup of what looks like coffee and a fallen Heiniken bottle set the state of consciousness that fills the scene. The landscape of the table begins to take on a dreamlike narrative.

Tackling specific object icons such as the Campbell’s soup can and filling it with a cactus is no frivilant choice- instead a metaphor playing with its own symbolic history- it holds a seed of insight into the type of conversation active within these still lives.  The title, Night Studio derived from Philip Guston’s Memoir plays with the motif of artist in the studio taking on the role of world builder. Gleaning the detritus of life, we find clearly- each object holds a key into a larger story at hand. A book of Alchemy and Mysticism lay atop another- “The Wild Beasts and its Affinities” which acts as a nod to the artists kinship with the Fauvists and Nabi.

Or take “Paradise à la Carte: Serendipity in the Tuileries (La Grande Bon Marche). Sitting as if watching from her own seat is Picasso’s Jacqueline avec des fleures. Homage, critic, or love poem she stares through a Calvados cocktail, a “The Corpse Riviver N1”, leading the viewer into what seems to be a picnic in Paris’ Tuileries. Present at the feast is Maillol’s Montagne, a white fig cake- sliced and ready for indulgence, spring time asparagus still wrapped in a cord from the market, a can of petit pois, a small guitar alludes to music- could it be one from Picasso’s museum in the Marais? It goes without saying each of these courses hold their own mythology and identity which all orchestrate together with vibrancy and painted bravado.

Pincus-Whitney’s influences: the post-impressionist tradition, verifiable in the elegance of the color of her canvases (a reference to Matisse’s chromatic world), the angles of the tables (an echo of Cézanne’s own still lifes), and the sensual impasto (a reminiscence of Van Gogh’s innovative usage of the technique). The dining table invokes a world in itself.

Still, the most significant influence of all is not set by these paintings’ referential or stylistic aspects. Instead, the power of Pincus-Whitney’s works lies in the way she establishes a conversation with the form of still life itself, her still life acts more like a narrative portrait of a place, person, or moment. While still actively engaging with the long linage of dutch still life or ’nature morte’, her works find their foundations associated with the original Egyptian funerary shrine paintings from the 15th century BCE.

Thus, Pincus-Whitney situates herself in this lineage not only through her rich and colorful rendition of the genre but mainly by understanding that the dining table tells us something about our own history. “Invested in the duality of the sacred and profane and its relationship to the theme of paradise,” the artist explains, “each painting explores a kind of cosmology of cuisine tapping into the alchemical power of taste, memory, identity.”

“Carte,” in French, doesn’t only mean “menu,” but it also means “map.” Pincus-Whitney made her choices and invited us to sit at the table with her. The menu is abundant. Where that will lead us, what new sensations, new cravings, and hunger will awaken in each of us, it depends only on our understanding and mixture of these elements. On how we interpret these paintings, how we enjoy the selection of references, historical cues, and cultural associations. The table is set, dinner is ready. 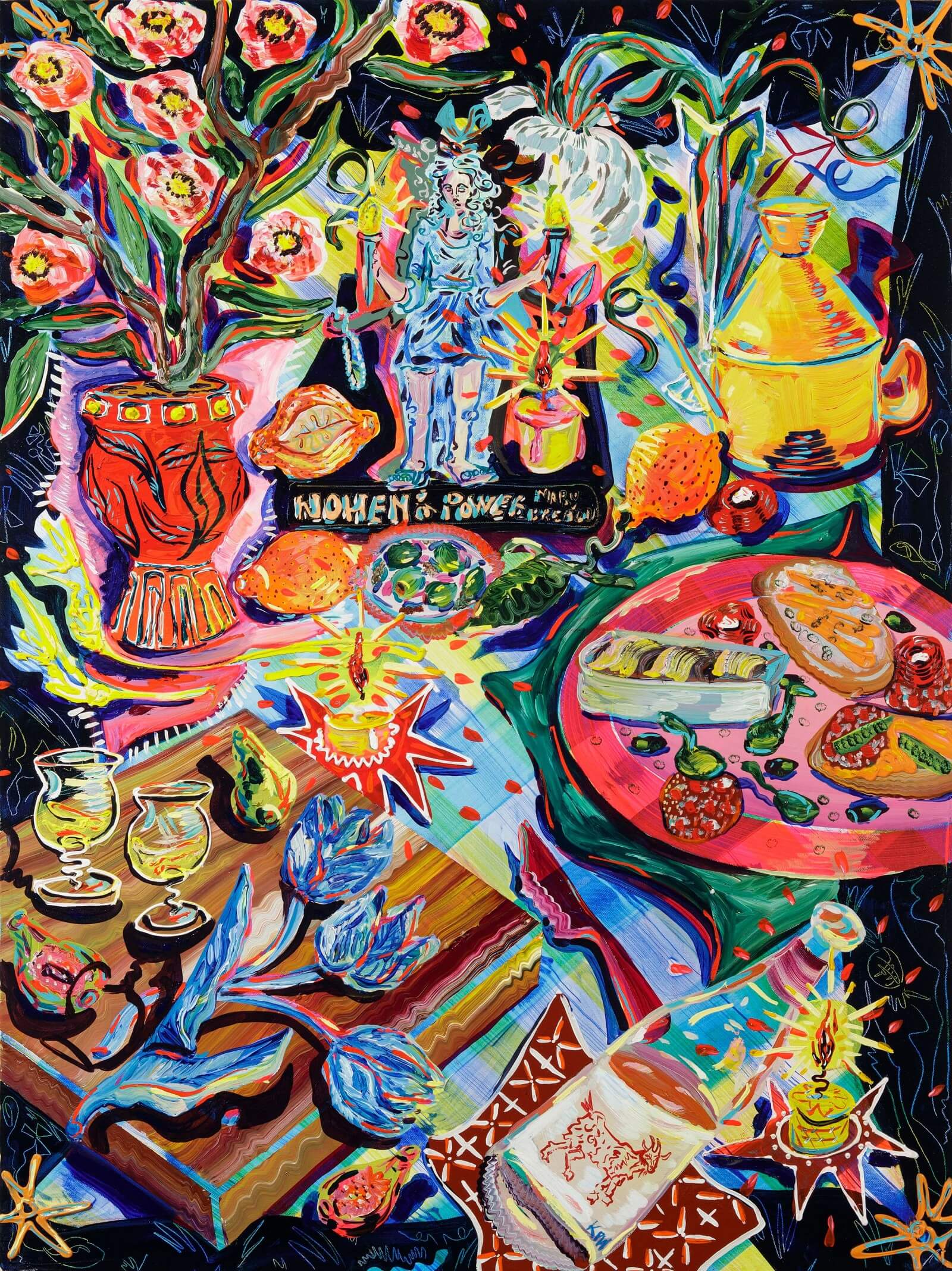 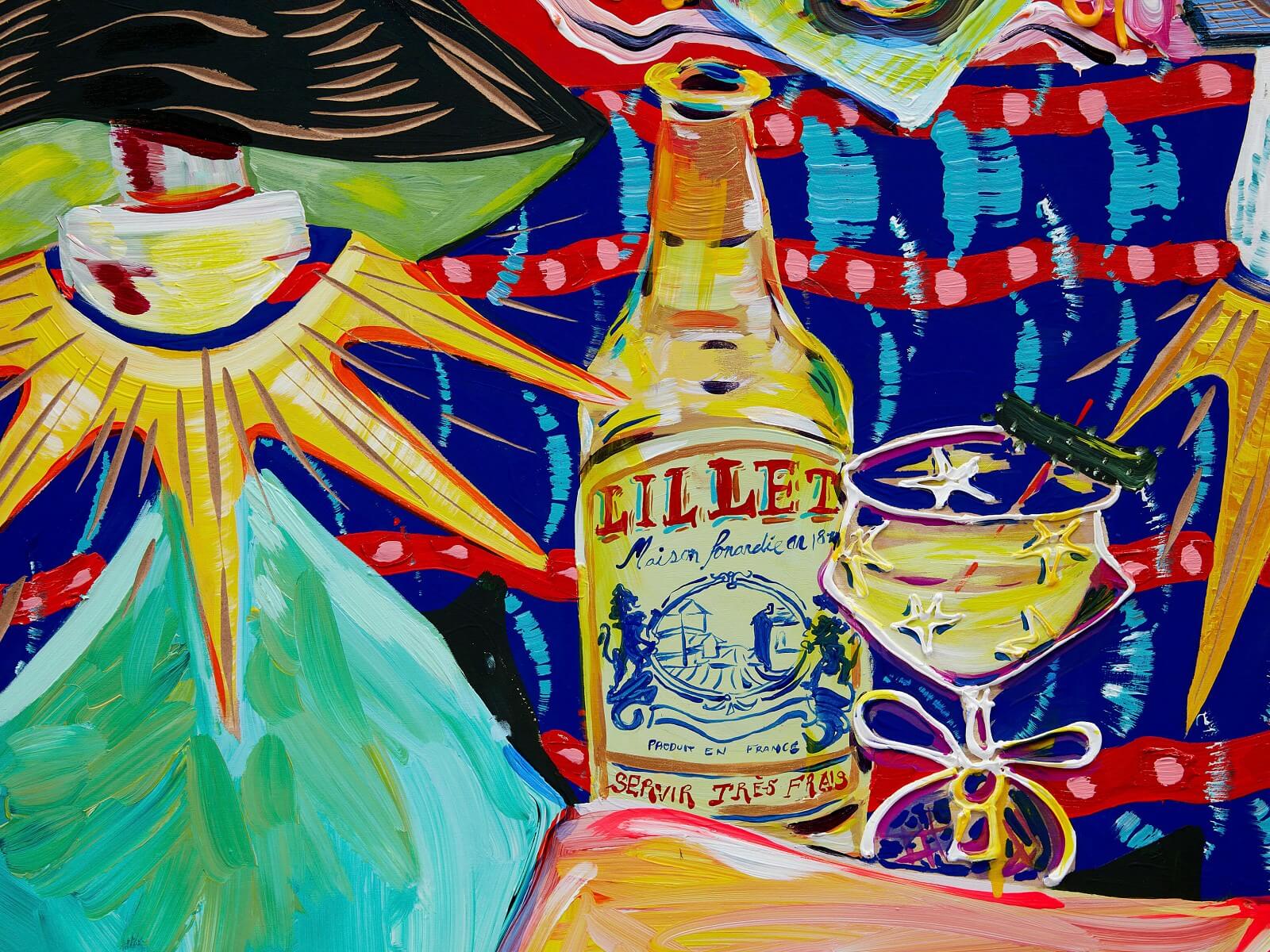 Kate Pincus-Whitney intermingles in her art the three basic human needs: food, security, and love, something she came to envision through her upbringing in which the kitchen, as a physical and emotional space, played a very important role. In her canvases, the many symbols attached to sharing a meal and to the theater of the dinner table are mobilized to establish a colorful and dense relationship with contemporary concerns of cultural identity. At the same time, by doing this, Pincus-Whitney places her work in a dialogue with the long tradition of representation and meaning of food in the history of art.

Kate Pincus-Whitney holds an MFA in Painting, Rhode Island School of Design, and lives and works in Los Angeles. She is a recipient of the Ellen Battell Stoeckel Fellowship to attend Yale Norfolk in 2015. She has been an active Artist Ambassador for the Kennedy Center in Washington D.C.